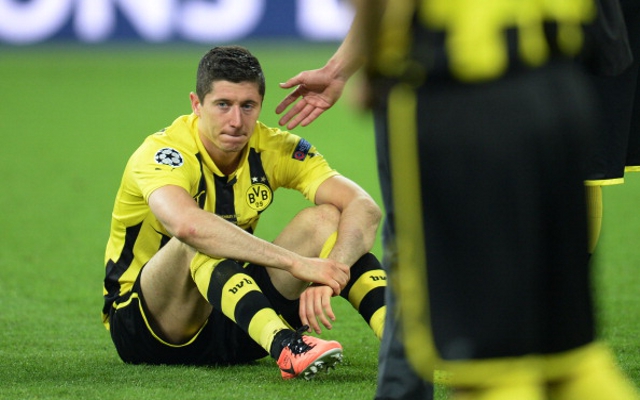 Manchester United are keen to be kept in the loop regarding the availability of Borussia Dortmund striker Robert Lewandowski, according to the Telegraph.

David Moyes is supposedly keen on making an audacious attempt to bring Real Madrid star Cristiano Ronaldo back to Old Trafford this summer, but wants Lewandowski as an alternative should the move fall through.

Ronaldo’s future is up in the air after the Portuguese star has denied signing a new contract at the Bernabeu, suggesting he is currently unsettled at the club. The likes of PSG and Monaco are also interested in the 28-year-old, and are ready to break his own world-record transfer fee to sign him this summer.

United may be priced out of a move, and remain keen on Dortmund’s Lewandowski, whom Sir Alex Ferguson considered signing last summer before eventually opting for Robin van Persie.

Lewandowski has made his desire to leave Dortmund clear, though he is understood to be holding out for a controversial move to their rivals Bayern Munich.

Dortmund do not want to sell another player to their rivals, after seeing star youngster Mario Goetze make the move to the Allianz Arena already this summer, meaning England could be the likely destination for the prolific 24-year-old.

Chelsea and Barcelona are also said to be tracking Lewandowski.