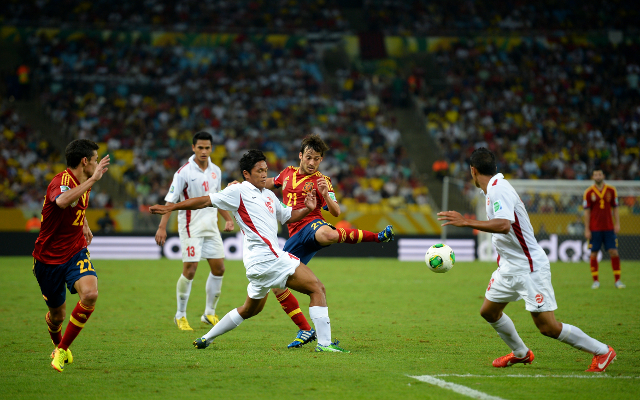 Spain could make it three wins out of three in Group B tonight.

Spain will be hoping to maintain a 100% record in the Confederations Cup group stages with a win over Nigeria tonight, and deny their opponents a semi-final spot in the process.

Nigeria will have a tricky time qualifying from the group, as Uruguay take on minnows Tahiti at the same time tonight, and will be expected to win comfortably against the side thrashed 6-1 by Nigeria and 10-0 by Spain.

Spain are also in good form, having won five out of their last six games, including an impressive 2-1 victory over Uruguay before their easy mauling of Tahiti. Vicente Del Bosque may make changes to the rather makeshift side that strolled past Tahiti, despite Fernando Torres and David Villa both netting hat-tricks. Roberto Soldado could return after his winner against Uruguay, and the likes of Santi Cazorla and Juan Mata should make way for Xavi and Andres Iniesta.

The tournament favourites should win the group, and set up a semi-final clash with Italy, who they beat 4-0 at last summer’s European Championships. Cesare Prandelli’s side were confirmed as runners-up in Group A after losing 4-2 to host nation Brazil yesterday.

Luis Enrique springs a huge surprise as he leaves Sergio Ramos out of the Spain squad for the Euros May 24 2021, 12:12
Real Madrid CF

Spain World Cup squad confirmed: Who is in the squad? As Chelsea and Arsenal fans fume over Premier League absentees May 21 2018, 16:09

Why David Silva will not feature against Argentina on Tuesday Mar 24 2018, 14:43
Manchester City