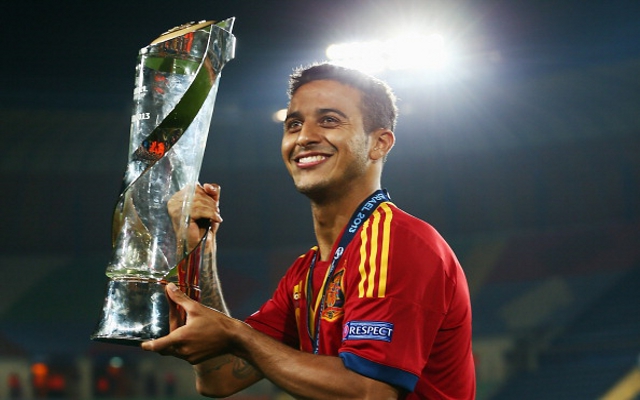 The Daily Star reports that a deal has been struck for Barcelona playmaker Thiago Alcantara to join Manchester United in a £15million move this summer.

The 22-year-old could play a crucial role for new United manager David Moyes next season, as he has been keen to bring in a replacement for the retiring Paul Scholes, being linked with big moves for other players such as Benfica’s Nemanja Matic and Juventus’ Claudio Marchisio.

However, Alcantara’s availability due to his desire to leave the Nou Camp for more regular first-team football has seen him emerge as Moyes’ priority, as has his relatively low asking price.

He could still be joined by PSV midfielder Kevin Strootman, but the signing of this exciting young talent, who hit a hat-trick for the Spain Under-21s in their 4-2 win over Italy in this summer’s European Championships, will be seen as one of the signings of the summer by United fans.

Despite not being a regular at Barcelona, Alcantara is rated as one of the club’s best young players, and they had been keen for him to stay at the club and eventually replace the likes of Xavi and Andres Iniesta in the heart of their midfield.

However, he has chosen to join United and immediately gain more first-team football, instead of sitting on the bench for Tito Vilanova’s side for any longer.