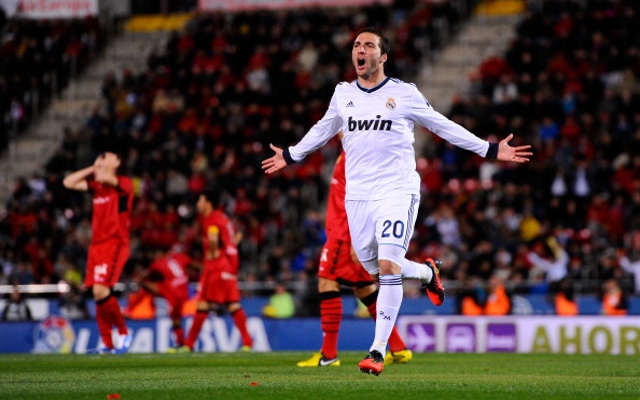 The Argentine has been part of a long-running transfer saga this summer, involved in something of a tug of war between Arsenal and Juventus ever since being put up for sale by the Spanish giants.

Despite the 25-year-old’s good goal-scoring record for the club, with 122 goals in 266 games overall, he has found himself somewhat out of favour in recent times, and looks to be part of a summer clear-out at the Bernabeu as they look to re-shape their squad for a renewed challenge on La Liga next season.

Other players such as Karim Benzema, Luka Modric and Angel Di Maria could also leave the club as they look to raise cash for some big-name transfer targets this summer, which include Tottenham’s £85million-valued winger Gareth Bale, and £50million Uruguayan strike pair Edinson Cavani and Luis Suarez, of Napoli and Liverpool respectively.

Arsenal have looked to capitalise on Higuain’s availability, as they are still in need of a top class striker to replace Robin van Persie, who left the club in a shock move to Manchester United last summer. Olivier Giroud and Lukas Podolski have done reasonably well to replace the Dutchman, but Arsene Wenger is still keen to bring in a more clinical finisher to be first choice upfront, and has also been linked strongly with Fiorentina frontman Stevan Jovetic for the last few months.

A move for the Montenegro forward looks to have fallen through, with the likes of Chelsea and Manchester City also keen on him, and this has seen Arsenal move quickly to wrap up a deal for Higuain.

The move should now be finally confirmed as the Spanish giants have now officially appointed PSG’s Carlo Ancelotti as their new manager, and the Italian is expected to give the move the green light as he looks to put his own stamp on the squad he inherits from Jose Mourinho.

Higuain will become Arsenal’s record signing at £22million, and signals a strong change in approach in the transfer market from Wenger, who had previously focused on bringing in lesser-known young players on the cheap, though these methods did not bring success to the Gunners, who have not won a trophy since the FA Cup in 2005.

The arrival of Higuain, following another big-name deal last year in Santi Cazorla, will show a real statement of intent from Arsenal to get themselves back into the thick of a serious title challenge, and with some signs of improvement defensively in 2012/13, a more regular goal-scorer could be just what the Gunners need to get themselves closer to their title rivals.