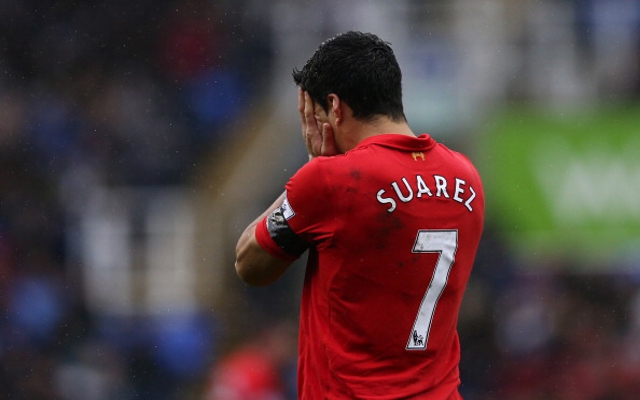 Anfield forward on his way to the Bernabeu?

Liverpool striker Luis Suarez has reportedly agreed terms with Real Madrid ahead of a possible move to the Bernabeu according to Spanish source Marca.

The 26 year old Uruguayan has stated repeatedly during interviews whilst at the Confederations Cup that he is hoping to leave Liverpool this summer though the Anfield side have publicly warned off interested parties from making an offer by saying that the former Ajax man is not for sale.

This hasn’t stopped speculation of a possible move to Real Madrid and this source suggests that the Spanish giants have already agreed personal terms with the Liverpool ace, which would just leave the small matter of a possible bid being accepted by the Merseyside club.

This source claims that Suarez has a €47m (£39m) release clause, one that Real Madrid would presumably be happy to trigger given the form that the Liverpool striker has exhibited over the past 18 months.

Suarez netted 30 goals in all competitions in 2012/13 and has become Uruguay’s all time top goal-scorer following his three goals during the Confederations Cup.

Brendan Rodgers has had a busy summer thus far, having already brought in Kolo Toure, Luis Alberto and Iago Aspas from Man City, Sevilla and Celta Vigo respectively. Liverpool are also said to be close to completing a deal to sign Sunderland keeper Simon Mignolet.