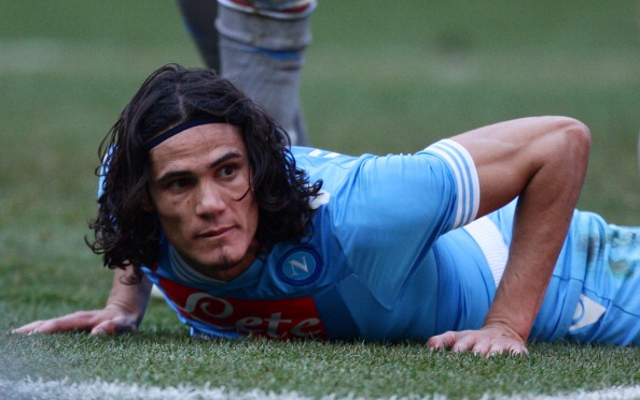 Old Trafford side look to bring in prolific Serie A hit-man.

Man United have joined the ever growing band of clubs pursuing Napoli marksman Edinson Cavani, with the Daily Mirror claiming that the Old Trafford side is willing to mount a club record £50m bid for the Serie A goal machine.

Chelsea and Real Madrid are most often referenced as the sides most likely to lure the Uruguayan international away from the San Paolo, with the chances of the 26 year old leaving Naples seemingly increasing since Rafa Benitez took over at the club, replacing Walter Mazzarri, the manager who brought Cavani in from Palermo three seasons ago.

This source claims that the Glazers are ready to back David Moyes in the transfer market and there seems to be some sense in the Premier League title holders looking to bring in a big name signing as a statement of intent to show any doubters that the retirement of Sir Alex Ferguson needn’t impact on the club in too drastic a fashion.

Cavani has netted 104 goals in 138 appearances for Napoli and helped his side to a runners-up spot in Serie A last term but still it seems likely that the powerful forward will look to make a move this summer.

Moyes apparently sees Cavani as a potential replacement for Wayne Rooney, who’s future at Man United seems to hang in the balance.

The 27 year old England man found himself playing in a more withdrawn attacking role last term, with Robin Van Persie being used to great affect as the spearhead for the Man United attack, indeed Rooney even found himself left out of Ferguson’s starting eleven for occasional fixtures, including the crucial Champions League quarter-final second leg tie with Real Madrid.

Rooney is then alleged to have made a verbal request to leave Man United towards the end of the season, a request the striker now vehemently denies. Add to the mix the strained relationship between the Old Trafford star and his former Everton boss Moyes and you have perhaps a ‘perfect storm’ of factors that could well lead the Wayne Rooney leaving this summer.