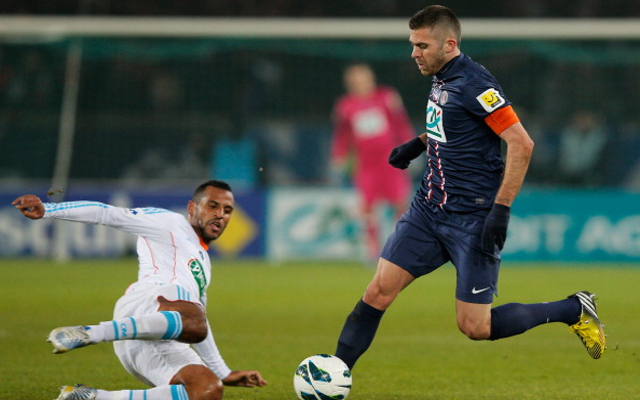 Anfield side alerted by PSG attacker’s decision to not sign new deal.

Liverpool are said to be ‘on alert’ following reports that French winger Jeremy Menez is ready to quit PSG, according to the Liverpool Echo.

The former Roma man arrived at the Parc des Princes in July 2011 and has been a moderate success, helping the big spending side to their first Ligue 1 title in almost two decades but the departure of Carlo Ancelotti may well have led the French international to re-consider his future at PSG.

Brendan Rodgers has already successfully brought in four new faces this summer; Kolo Toure, Luis Alberto, Iago Aspas and Simon Mignolet, but may feel he could do with a wide attacking addition.

Given that Stewart Downing continues to make little or no impact whilst youngsters Raheem Sterling and Suso may well be eased into first team action next seasons rather than being used as regulars, there may well be scope for signing a winger and Menez is certainly experienced and able enough to make an impact in the Premier League.

Prior to his move to PSG Menez spent three seasons with Roma and the 26 year old has over 300 club appearances to his name as well as 24 French national team caps.

If Menez does indeed opt to not sign a new deal then he could well be available on the cheap as he is now into the final year of his current contract.