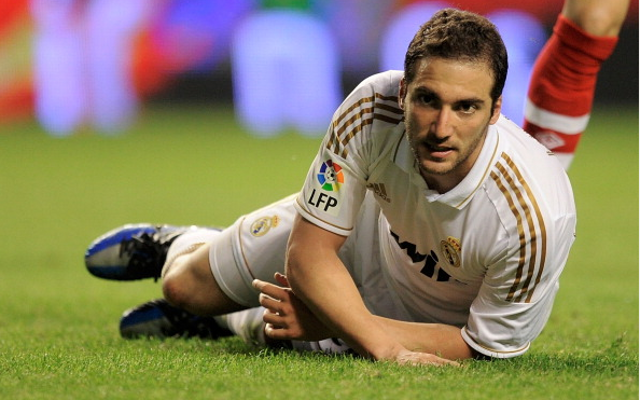 Arrival of Carlo Ancelotti paves the way for Argentine’s exit.

Real Madrid are ready to sanction an exit for their striker Gonzalo Higuain according to The Independent.

The Argentine striker has been closely linked with a move away from the club for some time, but it is thought that Madrid were keen to receive the go ahead from whoever they appointed to succeed Jose Mourinho before allowing any deal to go through.

The Spanish giants have now announced former PSG boss Carlo Ancelotti as their new manager which could put the wheels in motion for Higuain to leave the club.

Arsenal and Juventus were thought to be favourites to secure the player’s signature. But Arsenal may now find themselves in pole position after the Serie A champions edged closer to the signing of Manchester City striker Carlos Tevez.

Arsenal are thought to be ready to smash their previous club record fee for a player in order to bring Higuain to the Emirates.

Their previous highest spend was on securing the services of Andrei Arshavin from Zenit St Petersburg while it is expected that Higuain would cost somewhere in the region of £25 million.

Should he arrive at the club, he is expected to be amongst the club’s highest earners, with Arsenal rumoured to have offered him wages in the region of £125,000 a week.