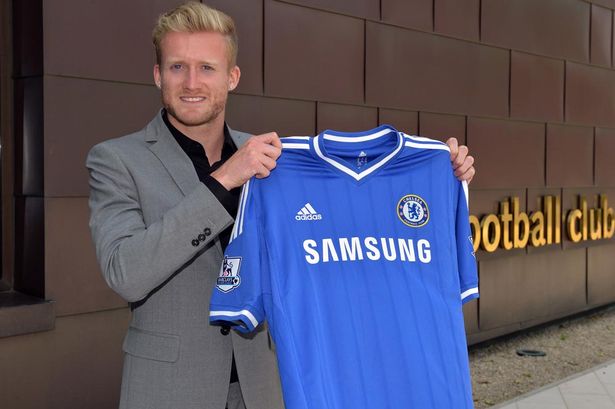 New Chelsea signing Andre Schurrle has confessed that he is excited at the prospect of playing alongside the likes of John Terry, Frank Lampard and Ashley Cole because he grew up watching them, the Mirror reports.

The west London club finally confirmed the signing of the young German international this week for a fee of £22 million.

And the 22-year-old highlighted the age gap between himself and the club’s older generation by saying: ” I’ve watched them play since I was a young boy, so it’s an honour for me now to be colleagues of theirs at Chelsea.”

But he said: “I can learn many things from them. They’ve all had long careers and they are legends at Chelsea Football Club.”

New Chelsea boss Jose Mourinho brought the former Bayer Leverkusen man in for his versatility, though he admitted that he prefers to stay on the left side of the attack.

“In attack, I can play in every position,” he said.

“But I think wide on the left is my best position because I can cut inside and score goals with my right foot, which I hope to be able to do here, but I am confident playing anywhere offensively.

“I think we have a great team with some very talented young players. We can all improve ourselves, and under Jose Mourinho I’m confident we can have a really great season.”