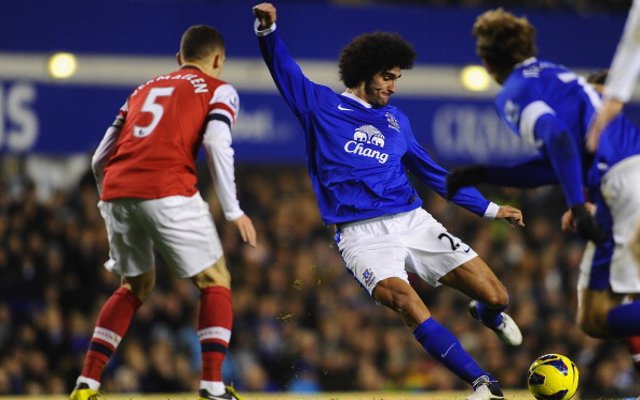 Arsene Wenger’s next priority is to seal the signing of Everton midfielder Marouane Fellaini with many sources already claiming that Arsenal have already made an offer that triggers the Belgian’s release clause.

The Arsenal boss has been given the go ahead to alter the club’s wage ceiling that will then allow the Emirates Stadium side to offer the 25 year old Belgian a competitive salary that Wenger hopes will see off in interest from other prospective suitors.

Wenger will look to seal personal terms with the Everton star with a four year deal worth in the region of £140k a week.

Fellaini’s representatives are said to have given Arsenal the encouragement they need ahead of a £22m bid that will cover the former Standard Liege midfielder’s release clause.

Fellaini is adept at getting forward, and netted a dozen goals in all competitions last term, but it’s in a more defensive midfield role that Wenger may be looking to use the powerful Everton man.

Arsenal lack bite in the centre of the park and Fellaini has himself talked up the possibility of becoming a more defensively minded player.

Wenger has not adequately replaced Alex Song, who left for Barcelona last summer, and Abou Diaby continues to suffer with injuries and poor form whilst Mikel Arteta, who was used primarily in a holding role in 2012/13, would benefit from the presence of a tough midfield partner, who could also offer protection to the likes of Jack Wilshere and Santi Cazorla.

Fellaini has enjoyed five solid seasons at Everton, making 173 appearances for the Merseyside club, scoring 32 goals in the process.