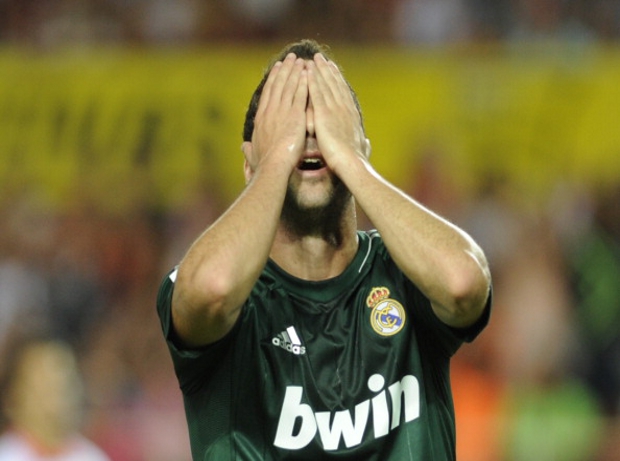 Arsenal are on the verge of pulling out of negotiations for Real Madrid striker Gonzalo Higuain according to Goal.com.

The Gunners have been strongly linked with the Argentine forward over the last few weeks and were thought to be favourites to land his signature.

Their main competition for Higuain was thought likely to come from Juventus but that threat was diminished after the Italian giants completed a move for former Manchester City striker Carlos Tevez.

That seemingly paved the way for Higuain to complete a move to the Emirates but it now appears that the deal is on the verge of collapse after the two clubs failed to agree a fee for the player.

Real Madrid are reportedly holding out for £25.5 million but the Gunners are refusing to pay more than £21 million.

The stalemate in negotiations has reportedly led to Arsenal preparing to take a look at other options.

The news will come to the dismay of Arsenal fans who were keen to see Gunners boss Arsene Wenger splash the cash this summer after years of financial restraint.

The club are understood to have a bit more leeway in their transfer dealings this summer after finally paying off the loan on the Emirates Stadium but it seems that old habits die hard with the club seemingly unwilling to stump up the extra £4.5 million Real are demanding for Higuain.

Arsene Wenger is reportedly ready to turn his attention to Man United striker Wayne Rooney and is set to step-up his interest in the England man as an alternative to Real Madrid ace Gonzalo Higuain.