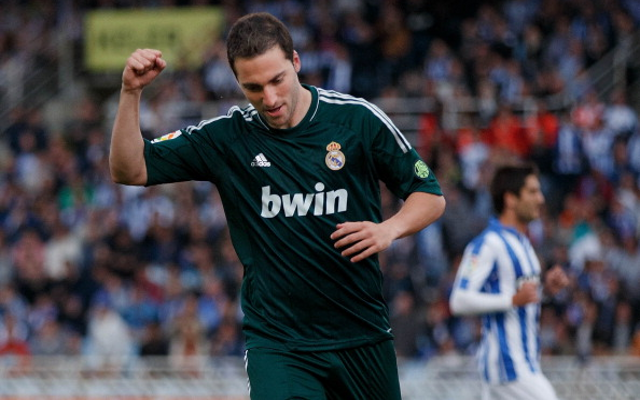 Emirates Stadium move should be completed within 24 hours.

Arsenal target Gonzalo Higuain is on his way to London ahead of final talks to complete his long awaited move to the North London club according to the Daily Mail.

The 25 year old Real Madrid striker has been given the all clear by his La Liga employers to discuss terms with Arsenal after the two sides agreed a fee of £22m for the Argentine forward.

His father, who also acts as Gonzalo Higuain’s agent, has stated that the move should be completed shortly.

‘We do not negotiate with any club without permission of the selling club,’

‘We have permission [from Madrid] and hopefully we can soon see my son in the Premier League.’

Initially there had been a gap between the two club’s valuations of the former River Plate man but a compromise appears to have been reached and the £22m Arsenal are set to spend on Higuain represents a club record fee for the Gunners.

Higuain has scored 106 goals in 188 La Liga appearances for Real Madrid and 122 goals in total during his seven seasons at the Bernabeu.

The Arsenal boss has successfully began to trim back his first team squad in preparation for new additions, offloading big earners like Andrei Arshavin as well as releasing the likes of Denilson and Sebastien Squillaci with Johan Djourou joining Hamburg on loan with a view to making a permanent exit.

Others are likely to follow in the coming weeks as Wenger looks for willing buyers for Marouane Chamakh, Nicklas Bendtner, Park Chu-Young, Andre Santos, Vito Mannone and Emmanuel Frimpong to name just six.