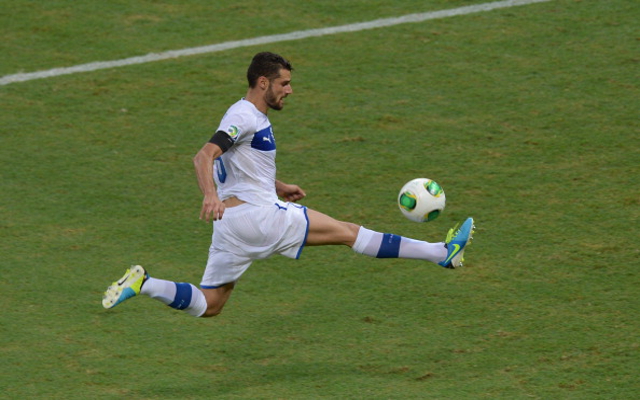 Old Trafford and Etihad Stadium sides among a host of clubs keen on Lazio midfielder.

Following speculation about his future in Italy with Udinese, midfielder Antonio Candreva is a reported target for Manchester United, Manchester City and Tottenham, report the Daily Express.

Candreva, 26, was hugely impressive throughout the Confederations Cup during Italy’s run to the semi-finals, and has attracted the interest of some of England’s top clubs, along with fellow Italian outfit Napoli, as well as Borussia Dortmund.

Only making several appearances for Udinese since his arrival at the club in 2007 from Ternana, Candreva has spent the last few seasons on loan to the likes of Livorno, Parma and Juventus, however, it was his impressive spell last term at Lazio where he came into the public spotlight.

Scoring seven goals in 47 appearances last season, Candreva earned a call-up to the national team, where he played an integral part in their success in Brazil.

Manchester United are looking for a long-term replacement for the retired Paul Scholes as new manager David Moyes cannot rely upon Darren Fletcher and Anderson for reliable performances, coupled with the fact that they are rarely fit enough for consideration.

Tottenham are planning an exodus of players in the midfield, with Tom Huddlestone and Scott Parker expected to be shipped out this summer. Candreva and new signing Paulinho will provide exellent competition for Sandro and Lewis Holtby as Tottenham stake their claim for a top four spot next term.

Manchester City have yet to see the best out of Jack Rodwell and Javi Garcia since they joined the club last summer, and Candreva will also be brought in for competition purposes, along with Fernandinho.