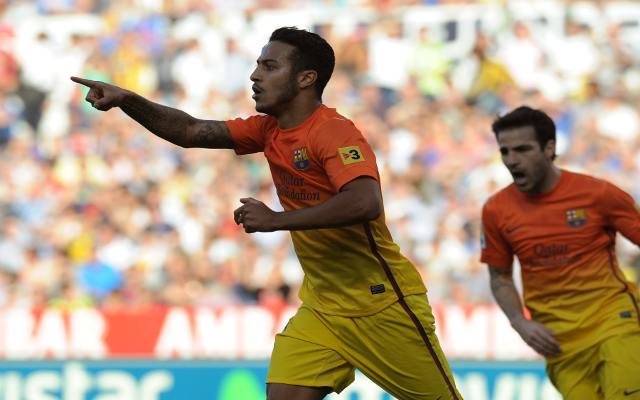 No bids made for young midfielder.

Sources close to Spanish giants Barcelona have denied that the club has received any official bids for Thiago Alcantara, according to Sky Sports.

The 22-year-old is rumoured to be on his way to Manchester United with European champions Bayern Munich also said to be monitoring his situation.

He is due to report back to Catalonia for pre-season training after featuring in a starring role for Spain’s European Under-21 Championship success.

Barca’s sporting director Andoni Zubizarreta is reported to have met with the player’s father and agent – former Brazilian international Mazinho – on Thursday, and demanded that the club expect a decision on Thiago’s future in ten days.

However, a decision is yet to be needed after an anonymous source at the club said: “We still have not received any formal offer for the player.”

It is believed that Barcelona are not looking to negotiate Alcantara’s sale with anyone, and instead hope to keep him at the club in a bid to eventually replace Xavi with him, but it is well known that he has a buy-out clause of just over £15million installed in his contract, so they would be unable to prevent him leaving if this figure was met.

Last season he started just 15 games across all competitions and is thought to want to move on in order to play more first team football and continue his growth.