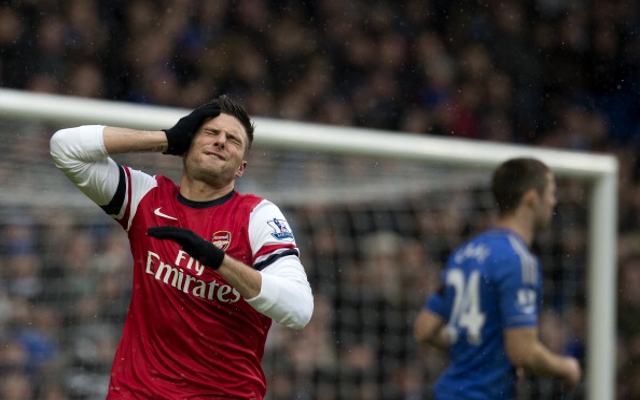 La Liga side Atletico Madrid have identified Arsenal striker Olivier Giroud as an ideal replacement for Radamel Falcao, who moved to AS Monaco earlier this month.

Spanish source AS believe that Vicente Calderon boss Diego Simeone is keen on the 26 year old French international, who could perhaps be a player considering his future given the number of striking talents Arsenal are seemingly pursuing this summer.

The former Montepellier man had a moderately successful first season at the Emirates Stadium, scoring 17 goals in all competitions but may feel that new Arsenal signings could lead to him being pushed down the Gunners pecking order and with a World Cup on the horizon could be worried about the implications of such a predicament.

If Arsenal do manage to complete the signing of Real Madrid ace Gonzalo Higuain it would seem likely that Arsene Wenger would then make the Argentine his first choice central striking option and unlike both Lukas Podolski and Theo Walcott the French marksman is not known for being able to play in a wide role and could therefore have to fight the incoming Bernabeu star just for a spot in the starting eleven.

Giroud could therefore be tempted by offers from elsewhere, especially if he felt that a move to Atletico Madrid would provide him with a guaranteed first team spot.