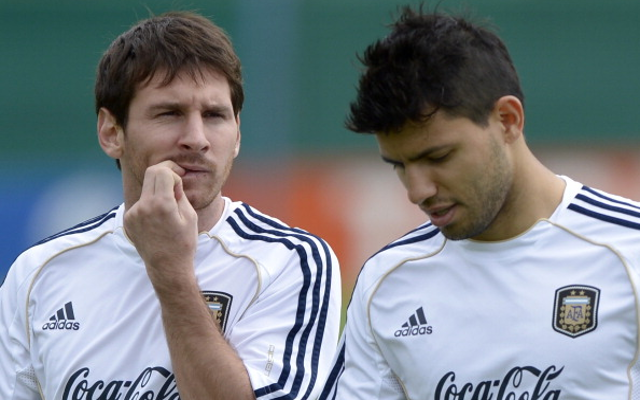 Nou Camp side linked with interest in Man City ace.

With the recent departure of Spanish forward, David Villa, to La Liga rivals Atletico Madrid for just €2.1million; the Spanish champions are now looking to sign a new striker to partner Lionel Messi upfront, and who better than someone who has already partnered the best player in the world for his country?

Kun Aguero lines up alongside Lionel Messi for Argentina more often than not, bagging 53 international goals between them, since their break through into the national side. The Manchester City forward will be an expensive option for Barca since the Premier League club have sold Mario Balotelli, to Milan, and Carlos Tevez, to Inter, in the last six months.

Surely the last thing on manager Pellegrini’s mind is losing yet another striker, especially Aguero with his record of 47 goals for Manchester City since his arrival in 2011.

Tito Vilanova has identified the 25 year-old as a potential signing according to Spanish source Sport.es, with a huge £40million price tag, but has not lined up an alternative if they fail to sign the Argentine.

Barcelona also appear to be on the lookout for a new central defender with two Brazilians being their primary targets. They aim to make a bid for Paris Saint Germain’s Thiago Silva of £30million, with a move lined up for Chelsea star David Luiz if a fee cannot be agreed. The only problem with Luiz, is that Vilanova and sporting director, Zubizarreta, cannot come to an agreement on the signing of the 26 year-old.