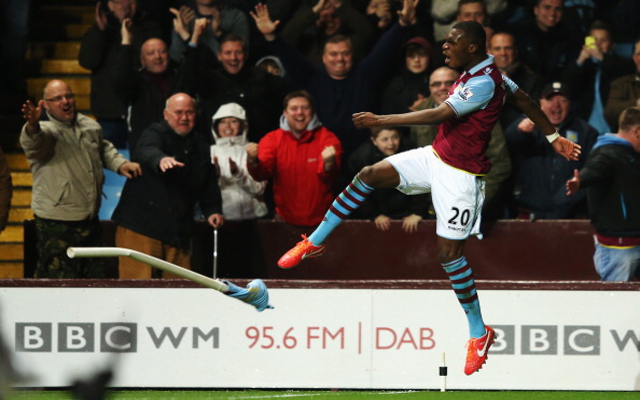 Arsenal are readying a move to sign want-away Aston Villa striker Christian Benteke after being encouraged by the forward’s representatives to make a move for the Belgian international.

CaughtOffside understands that the Villa Park star would be keen on a move to the North London club and having put in an official transfer request there is growing speculation that Aston Villa will accept offers that meet their valuation of the former Racing Genk youngster.

Benteke had an outstanding first Premier League season, netting 19 top tier goals and 23 in all competitions, and without the powerful forward it’s fair to say that Paul Lambert’s side may well have been doomed to suffer relegation to the Championship.

It did appear that the 22 year old was happy to remain at Aston Villa but has now opted to force a move away from the Midlands club and Arsene Wenger is ready to make an offer of around £22m for the player who cost £7m last August, an opportunity then for owner Randy Lerner to more than triple his investment in less than a year.

Arsenal will no doubt have to fight a number of other interested parties with Chelsea, Tottenham and Bundesliga side Borussia Dortmund all known to be interested in Benteke but the forward has previously singled out his interest in a move to the Emirates Stadium and is now hoping to see such a move become a reality. Wenger believes he has every chance of luring Benteke to join his Gunners attack and is certainly on the look out for talents that can strengthen his strike-force. Arsenal have seemingly not gained ground in their efforts to bring in a host of talents, which during the summer have already reportedly included genuine moves moves to bring in Stevan Jovetic, Gonzalo Higuain, Wayne Rooney and Luis Suarez.

Benteke may feel that a high-profile move would be advantageous to retaining a prominent role in the Belgian national team set-up, which could perhaps become all the more relevant if as expected Jose Mourinho welcomes back Romelu Lukaku to the Chelsea first team fold.

Wenger is thought to still have faith in last summer’s striker signing Olivier Giroud but is keen to bring in further options that could perhaps better fill the void created by Robin van Persie’s move to Man United last August.

French international Giroud does not have the adaptability Wenger can utilise from the likes of Lukas Podoslki and The Walcott, who arguably both offer more from wide attacking roles, and as such the Arsenal manager believes he needs to bring in a more prolific option to spearhead his Gunners attack.

As Benteke is now a proven Premier League forward Wenger feels that outlay of a club record fee of £20m+ is in many ways a potentially less risky proposition than shopping in foreign leagues.