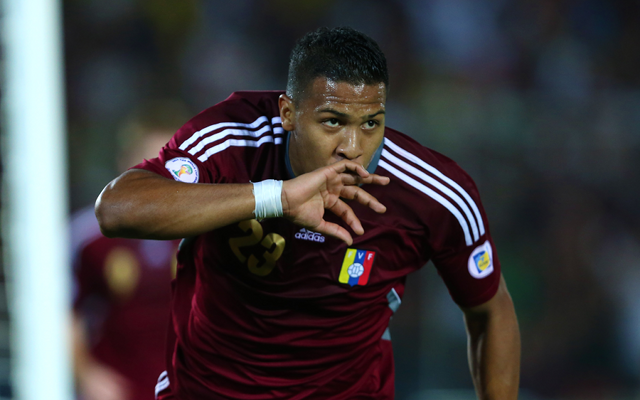 The Venezuelan international worked with the new City boss during their time together in Spain with Malaga, and reports have suggested that the pair could be lining up to reunite in the northwest of England this summer.

City are in the market for a striker following Carlos Tevez’s departure to Juventus last week, but Rondon has been quick to deny such a link.

“The press sometimes come to conclusions from sources that nobody knows,” the 23-year-old told EFE.

“The truth is that I have no formal knowledge about any of those clubs.

“Yes, we read and hear things in the press, it’s talked about that there is possible interest, but until something is made formal, or there is something concrete, I can’t tell you anything.”

Meanwhile, reports in Argentina believe that City have made an enquiry into the availability of San Lorenzo winger Julio Buffarrini, who has said that he would jump at the chance of such a move.

“If an offer arrives, and it’s useful for San Lorenzo, we will analyse it,” the 24-year-old told Mundo Azulgrana.

“Therefore, I have said to Marcelo Tinelli, the vice-president, that the only team that I would play for in Argentina would be San Lorenzo.

“I have heard about a possible interest from Manchester City. If I have to leave, I will do it very happily.”