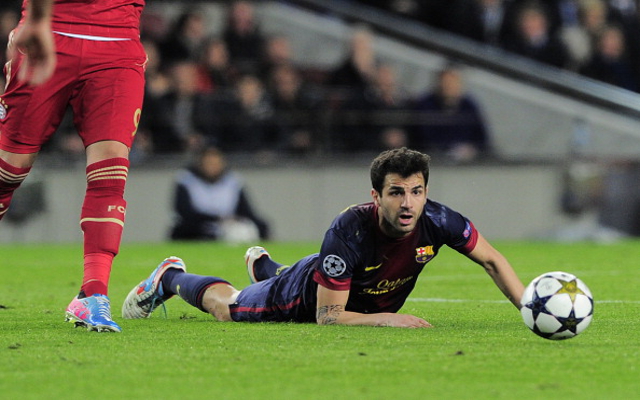 Arsenal are set to make a £25m move for former Gunners skipper Cesc Fabregas according to the Daily Mail.

Arsene Wenger is ready to make an offer that would bring in to play a first refusal clause that was placed in the Barcelona midfielder’s contract after his return to the Nou Camp back in August 2011.

The Arsenal boss hopes to persuade Fabregas to move back to North London and will hope that any uncertainty the Spanish international feels about the relationship between himself and boss Tito Vilanova will play into the Premier League club’s hands.

Though the 26 year old played the majority of La Liga matches last season he was on occasion left out of big fixtures both in domestic and Champions League clashes and this has led to speculation that Fabregas could look to leave the Catalan club for a second time.

Fabregas spent eight years at Arsenal and clearly still has a great affinity with the club and it seems certain that any potential Barcelona exit would in all likelihood entail a move back to the Emirates Stadium.

Whilst Arsene Wenger may have a host of attacking midfield options he clearly must feel that a move for Fabregas would act as a further improvement and perhaps a more clinical link between midfield and attack.

Arsenal have been linked with interest in Everton’s Marouane Fellaini but would seemingly prefer to move for Fabregas and any successful pursuit of the Spaniard will depend greatly on any assurances Vilanova would be willing to give the talented flair player.

Fabregas racked up 303 appearances for Arsenal before leaving for Barcelona in a £24m move, scoring 50 goals in the process.