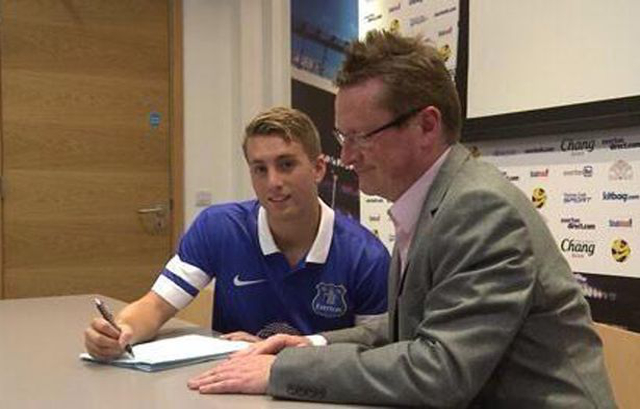 The forward is one of Barcelona’s most exciting young prospects.

Everton have officially completed the signing of Barcelona forward Gerard Deulofeu on a season long loan.

Deulofeu made 33 appearances for Barcelona’s B-team last season, scoring 18 goals and Everton have beaten many European clubs to the signature of the young Spaniard.

The player has made an impact for Spain’s under 19’s, helping them win the European Championships in 2011 and 2012.

Deulofeu will be Roberto Martinez second signing as Everton manager, after the Toffees completed a deal to sign Arouna Kone from Wigan Athletic for £5 million.

Martinez is clearly happy to have Deulofeu at Goodison Park next season and the Spaniard looks set to play a key role in Everton’s season.

“I am delighted that he has chosen to take the next step of his career with Everton.”

The forward will join up with Everton after his summer break.

He recently played for Spain at the under 20 World Cup in Turkey and will now get plenty of time to re-charge his batteries before his first taste of Premier League football.

Barcelona will be hoping that under Martinez, Deulofeu will be able to get plenty of first team opportunities under his belt and continue his development.