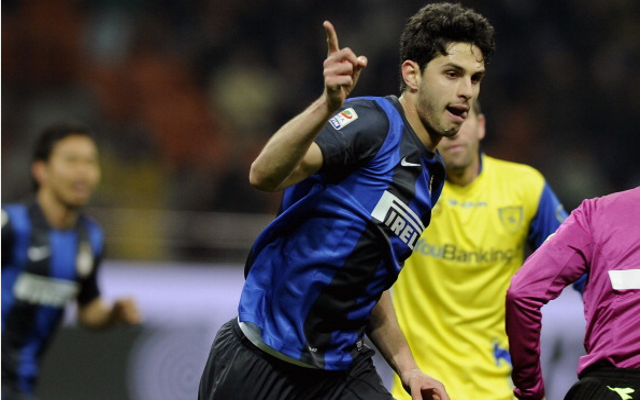 Tottenham are to make a bid to sign Inter Milan defender Andrea Ranocchia this summer, battling Zenit for his signature, report Calciomercato.com.

Following their poor 9th place finish in Serie A last season, Inter Milan are set to sell the majority of their first team stars this summer, with Ranocchia leading the exodus. Manchester United and Arsenal have both registered their interest in the Italian defender, who claims he would prefer to remain in Italy next season, opening up a potential move to Juventus.

Ranocchia, 25, is expected to be available for around £12million this summer, as Spurs prepare a bid for the defender. With established defenders Jan Vertonghen and Michael Dawson in place at Spurs already, along with rising young star Steven Caulker, this interest in Ranocchia comes a surprise to many. French defender Younes Kaboul could be left as the odd man out at Spurs, as rumours about his future at the club build.

United and Arsenal are not short on defensive players, but the arrival of Ranocchia at either club would only add to the growing speculation of an exit for some of their stars. Laurent Koscielny has been linked with a move to Barcelona this summer, whilst Manchester United defenders Rio Ferdinand and Nemanja Vidic have both been rumoured to be on their way out of Old Trafford.

The sale of Ranocchia this summer is expected to pave the way for Inter to sign Juventus midfielder Mauricio Isla. The midfielder could even be used as a make-weight in the deal to sign Ranocchia from Inter. The San Siro club have already had a bid of €5.5million turned down for Isla, as the Italian champions are looking for an offer in the region of €7.5million.