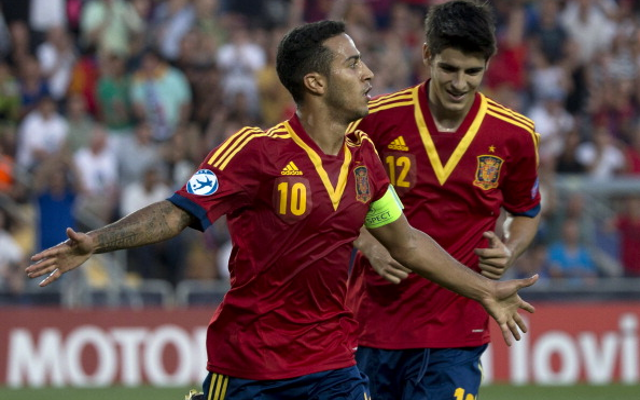 Bayern Munich have reportedly met Thiago Alcantara’s buy out clause, and are awaiting his arrival in Germany to finalise the deal according to talkSPORT.

The German champions today met the €18million (£15million) buy out clause for the 22 year-old midfielder, who has been heavily linked with a move to Premier League champions Manchester United. But it is expected that the midfielder will sign a five-year deal and undergo a medical within the near future, as personal terms appear to have already been agreed.

Manchester United boss has today been questioned about Bayern leading the chase for Thiago, in response he said : ” I never said he was a target.”

Thiago will reunite with former boss Pep Guardiola if he is to agree terms with the European champions, and move to the Allianz Arena. The Bayern boss was the man who gave Thiago his Barcelona debut, back in 2009, and has confirmed to the midfielder that he will play a vital roll in his attempt to revamp his squad, by bringing in new faces.

He will also join up with new arival Mario Gotze who has recently arrived from Bundesliga rivals Borussia Dortmund for a fee of €37million after successive impressive seasons at Signal Iduna Park [formerly known as Westfalenstadion]. The German 21 year-old was told he was one of Pep Guardiola’s favourite players, which is meant to have been one of the factors that brought him to the Allianz Arena.