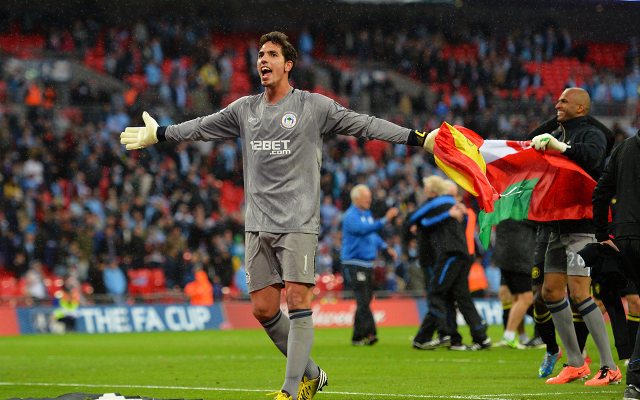 Spaniard looking to make an impression at Goodison.

New Everton goalkeeper Joel Robles has said that he intends to pile the pressure on current number one Tim Howard this season, according to the Mirror.

Manager Roberto Martinez completed the signing of the goalkeeper from Atletico Madrid this week after working with him last season at Wigan Athletic and he now becomes the third Latics player to follow the manager to Merseyside after Arouna Kone and Antolin Alcaraz signed on too.

The 23-year-old already dispossessed a regular number one as he kept Ali Al-Habsi out of the Wigan side and even taking his place for the FA Cup final against Manchester City in May.

And the Madrid native has insisted that he has not come to the club with the intention of sitting on the bench.

“I’m a very ambitious goalkeeper,” he said. “I can’t wait to get started at such a big club.

“It’s a great honour to come here and work with Tim. He is a great goalkeeper and I am sure I will learn a lot from him.

“Obviously we will be competing together and it’s the manager’s decision at the end of the day.”

Robles made his debut for Wigan in the FA Cup fourth round tie against Macclesfield Town in January and went on to make a further 13 appearances for the club.