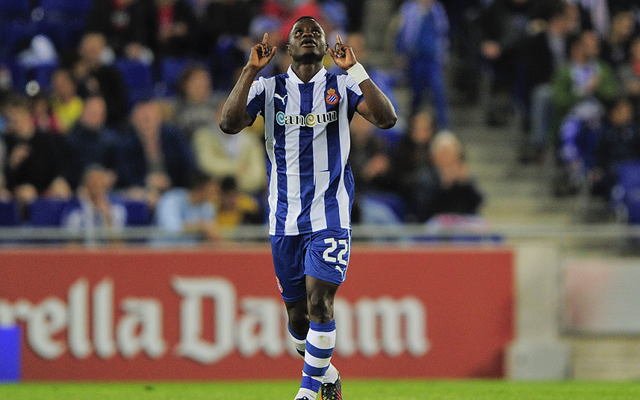 Liberty Stadium side told to fork out more for La Liga youngster.

Swansea have had a bid turned down for Espanyol midfielder Wakaso Mubarak, according to talkSPORT.

The Swans must up their offer of £3.9million offer for the Ghanaian midfielder, as the Spanish club want in excess of £4million for the player. The Spanish side are expected to sell Mubarak this summer as they look to balance their books, but their vice-president Jose Luis Morlanes insists £3.9m will not be enough to prise the 22-year-old away.

He said: “We have received an offer of £3.9m from a European club, but we will not sell for this amount”. The midfielder, formerly of Elche and Villarreal, joined Espanyol in a bargain £260,000 deal last summer and impressed during his maiden season in Catalonia. His displays have alerted Laudrup, who has already signed Jordi Amat from Espanyol, while Juventus are also tracking him.

Having just signed Wilfried Bony from Dutch side Vitesse Arnhem for £12million this week, Mubarak could become the seventh signing this summer for Swansea, and takes their spending to approximately £20million after the arrivals of Jose Canas, Alejandro Pozuelo, Jordi Amat, Jonathan De Guzman and Jonjo Shelvey.

According to the Daily Mail, it’s thought Michael Laudrup would like a second striker, as well as another winger. Owner Huw Jenkins told Sportsmail on Monday: ‘We will look to finalise this deal first, but we might look to bring in one or two others.’