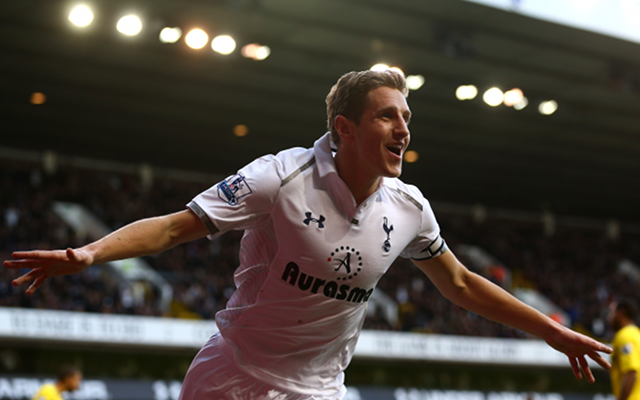 Tottenham Hotspur captain Michael Dawson says that the north London club will learn from the mistakes that they made last season as they once again go in search of Champions League football in the new campaign, reports the Guardian.

The occasional England international was also quick to point out the positives in the fact that the club have managed to keep hold of prize asset Gareth Bale so far this summer in the face of renewed interest in the wide man from Spanish giants Real Madrid.

“We had a great squad already, and keeping Gareth [Bale] is massive,” said Dawson. “A little bit of tweaking and strengthening, and we’ll have improved again. Now we have to earn the right to finish in the top four.”

And the 29-year-old went to to say that he feels confident that Andre Villas-Boas’s men will come back stronger next season after what happened to them in the closing stretch of the previous campaign, when their bitter city rivals Arsenal once again pipped them at the post in the race for Uefa Champions League qualification.

Last season, of course, Dawson and Co held a big points advantage over their north London rivals after beating the Gunners 2-1 at White Hart Lane, only for Arsene Wenger’s men to then go on a long unbeaten run towards the end of the campaign that ultimately saw them finish in fourth place in the standings come May.

“There’s no hiding that the end of last season was a massive disappointment,” said Dawson. “To have finished with 72 points, a Tottenham record, and yet missed out on the Champions League, our target back at the start of the season … But we go again. I’m always positive going into a new campaign. What Arsenal did in the run-in last year was amazing, and there you go. What can you do?

“We have to learn from what happened, where one or two bad results ended up costing us, but also keep doing what we were doing last year, performing well on a regular basis, getting points when the going is tough, and playing that football with the same style. People loved watching us. And, while everyone says the other teams at the top are improving, so are we.”

Meanwhile, the central defender has also welcomed the recent £17 million arrival at White Hart Lane of Brazil international Paulinho, a midfield player who has already netted five goals for the Selecao in just his 17 appearances for his country.

“We definitely come back stronger. The signing of Paulinho over the weekend was a big statement,” Dawson said.

“I saw him in the Confederations Cup this summer and he’d been strongly linked with various clubs, so it’s nice for us to get our hands on him. Then there’s keeping Gaz, too. I’ve been lucky enough to play with some top players here, like Michael Carrick, Dimitar Berbatov and Luka Modric, and seen them move on.

“So to keep hold of Gareth, a world-class player who had such an incredible season last year, while also bringing others in will only stand us in good stead. It changes the whole mood around the place. The hope is that, in a year’s time, we’re sitting here looking forward to a Champions League campaign. Now we have to go and earn that right.”