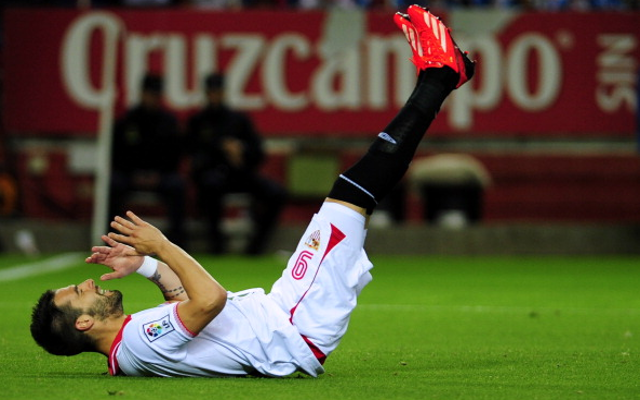 Etihad Stadium side close in on La Liga and Serie A aces.

Manchester City are believed to be closing in on the double signing of strikers Stefan Jovetic and Alvaro Negredo, reports the Daily Mail.

The Sky Blues are closing on the £20million signing of Sevilla striker Alvaro Negredo, after already signing teammate Jesus Navas, according to the club’s manager, who has revealed he expects Negredo to be sold soon.

‘The most likely situation is that he will leave,’ said Sevilla boss Unai Emery. ‘The cards are on the table. Negredo is a very important player to Sevilla and he could continue to be one, either by staying here or by earning the club a big transfer fee. We know he could leave, but it would be the best for everyone.’

Following the loss of Carlos Tevez, the club are in search of an extra striker or two. Negredo has been identified as a top target for new manager Manuel Pellegrini, who has seen the striker first hand during his time in Spain with Malaga. Bosnian forward Edin Dzeko is also tipped to leave the club this summer, with Chelsea interested, and Negredo has a similar build and skill-set to fill his void.

City are also believed to be close to signing Stefan Jovetic from Fiorentina for a £30million fee. The Viola have admitted there is mass interested in their prized asset, with Juventus, Arsenal and Manchester United all said to be interested in him. He is understood to be the premier target, but negotiations on his transfer will not affect the deal to sign Negredo this summer. PSG striker Zlatan Ibrahimovic has also been linked with a £17million move to Manchester, as City look to rebuild their squad ahead of the new season.