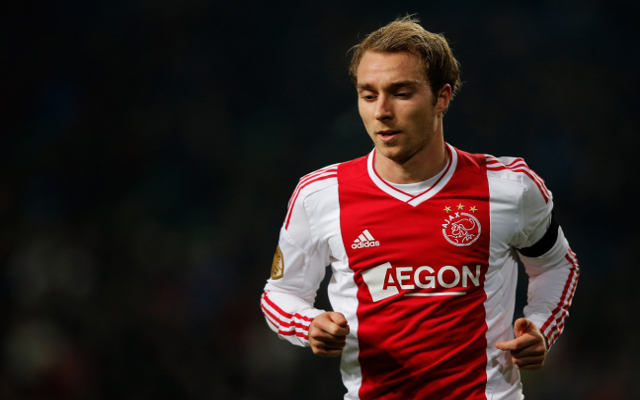 Dutch champions will not stand in the way of playmaker’s move to Anfield.

Ajax boss Frank de Boer has stated that he would not stand in the way of Danish international Christian Eriksen completing a move to join Liverpool if he so desired according to Sky Sports.

The 21 year old playmaker has been hotly tipped to make a move to Anfield and was recently linked with a £22m move, along with team-mate Toby Alderweireld, to the Merseyside club and De Boer’s specific referencing to Liverpool in a recent statement will have many assuming that a move could be in the offing.

“It is up to Christian what he wants, If he feels good going to Liverpool, then it is up to him.”

“I would want nothing more than having him with us for a few more years.”

“But we realise the interest in this kind of player is huge. And I can also understand that he wants to make another step in his career. I can’t stop him.”

Having helped Ajax to three consecutive Eredivisie titles the young Dane may be ready for a new challenge and even though Liverpool do not have European football to offer Eriksen he could be won over by Brendan Rodgers’ push to assemble a more youthful squad that could hold the club in good stead in the medium to long term.

Eriksen has scored 23 goals and provided 40 assists over the course of the last three domestic campaigns and is considered one of the hottest prospects in European football and could perhaps be considered a long term replacement for Steven Gerrard.

Having seen Liverpool’s advances for Armenian Henrikh Mkhitaryan fail to bear fruit, with the Shakhtar Donestk man opting to move to Borussia Dortmund, Rodgers may hope to bring in Eriksen as his fifth summer signing following the captures of Kolo Toure, Luis Alberto, Iago Aspas and Simon Mignolet.