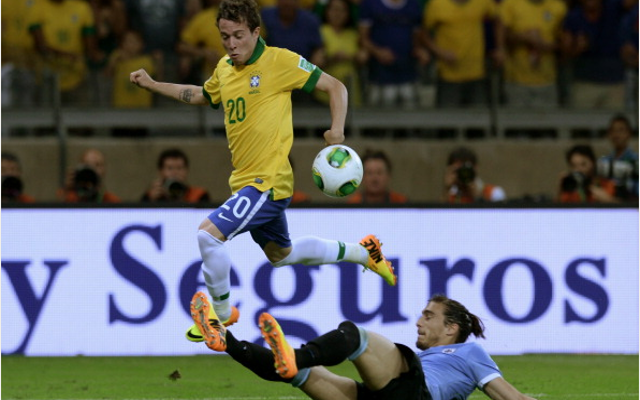 The Brazilian source claims that both Premier League clubs are ready to meet the £21.5million release clause of the Atletico Mineiro forward, who is regarded as one of the hottest properties in Brazil right now.

O Tempo claims that the Gunners are set to make an offer close the release clause of the 20-year old attacker, who is also a target for Porto, Dortmund and Shakhtar Donetsk. The young Brazilian claims he is ready for a move to Europe, and according to reports he feels Porto present the best option for him, providing a stepping stone to some of Europe’s elite clubs.

O Tempo also reports that Liverpool are keen on signing Bernard, and Placar Esportes claims Liverpool are prepared to meet the release clause. Porto pose the biggest threat to any potential deal with Premier League clubs, as they have a partnership with BMG, an association that part-owns the rights to Bernard.

Arsenal are willing to sell fringe players Gervinho and Ryo Miyaichi to make room for Bernard at the club. The Ivorian winger is a target for Galatasaray in a £7million deal as Arsene Wenger looks to build a competitive squad. Able to play off the left or through the middle, Bernard would fit in with Arsenal’s rotational forward formation.

Liverpool are also planning to sell flop wide-man Stewart Downing to make room for Bernard, with West Ham interested in signing the England international for £5million this summer. Having also brought in versatile forwards Luis Alberto from Sevilla, and Iago Aspas from Celta Vigo, manager Brendan Rodgers hopes Bernard will give the club enough creativity to compete every week.