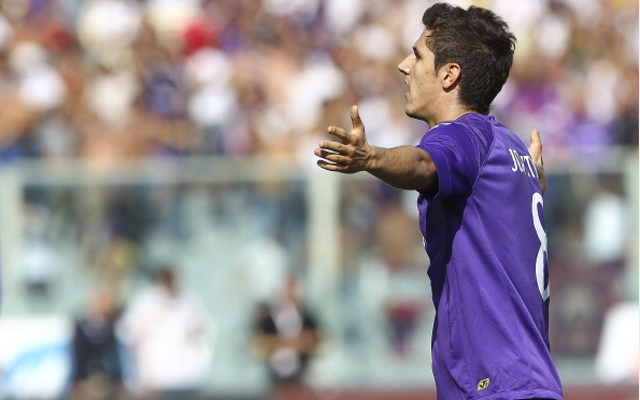 North-west outfit have beaten off competition for Montenegrin star.

Big-spending Manchester City are on the verge of sealing a £27 million deal to sign in-demand Fiorentina front man Stevan Jovetic, according to reports in the Sunday Sun.

The Montenegro international has been the subject of intense speculation of late linking the player with a whole host of big-name clubs from across the Continent.

At first, it had been thought that the forward would be joining either Serie A champions Juventus or north Londoners Arsenal.

However, the Florence-based club refused to do business with their fierce rivals from Turin, while Jovetic has turned down the opportunity to move to the Emirates this summer.

All of which left a straight fight between mega-rich City and Liverpool, with the 23-year-old’s agent flying to England last week to finalise matters.

And now it appears as though it is Manuel Pellegrini’s side who have won the race to land the Montenegrin, who has netted 40 goals in his 134 matches in all competitions for Fiorentina, including 35 strikes in his 116 league encounters since joining the Italians from Partizan Belgrade for just £8m in May 2008.

Jovetic is now expected to sign a bumper five-year contract at Eastlands worth a whopping £120,000 per week, with a source close to the striker saying: “It’s pretty much sorted he’ll go to City.

“They just have to sort his contract. It shouldn’t be a big problem.”