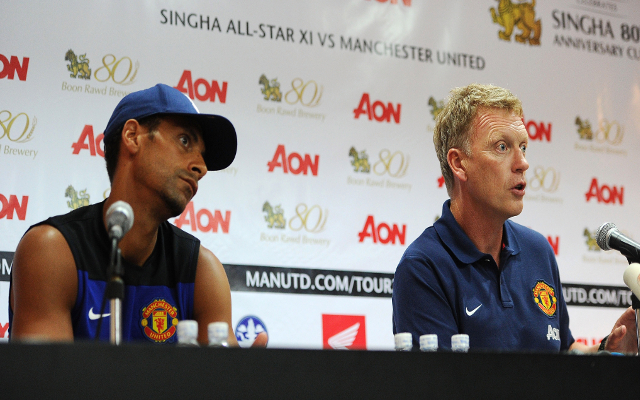 Scot’s arrival has United player’s on their toes.

Veteran Manchester United defender Rio Ferdinand has admitted that the presence of new Red Devils head coach David Moyes has added a new dimension to proceedings on their tour of the Far East, reports the Daily Mirror.

The 20-time top-flight champions have just embarked on their first pre-season tour of the post-Sir Alex Ferguson era following the Scot’s shock decision to call it quits after more than 26 years in charge of the club last May.

And now new man Moyes is at the United helm, having moved to Old Trafford from Everton after 11 years and 518 games as manager of the Toffees, with former England international Ferdinand claiming that the Glaswegian’s arrival has added a new spark to training ahead of the new campaign.

“I think it’s natural that everybody here is trying to impress on this tour,” said Ferdinand.

“When you get a new manager you want to show him that you should be in the starting XI for that first day of the new season and that process has started already.

“We’ve been back from our holidays for more than a week and it’s been a really good start.

“It’s been very, very hard but it’s been enjoyable and I think we’ll see the benefits of the work we’ve been putting in back in Manchester and the work we’re about to do on tour.

“That will come in the shape of better fitness and a better understanding of the personalities of the players and the coaching staff, because it’s a new era for all of us.

“Hopefully things will come together and we can get off to a good start once the season begins.”

Moyes comes to the north west with a glowing reputation from his time spent on Merseyside where despite never actually winning a trophy, the 50-year-old did manage in getting Everton to consistently punch above their weight in the Premier League, with the Merseysiders consistently finishing in the top six of the table during his decade and more at the club.

United’s tour will last for three weeks, starting in Thailand and then taking in four more countries before they return to the UK to defend their title next month.