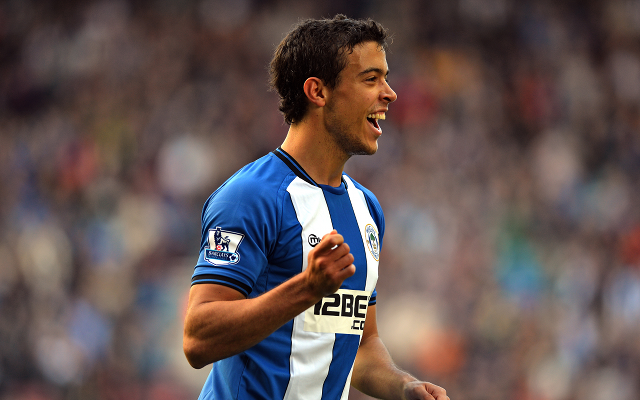 Liberty Stadium side pursue out of contract Argentine.

Swansea look set to sign free agent attacking Franco di Santo in the coming days, after it was revealed he will not be joining West Brom, according to the Birmingham Mail.

The Midlands paper reported that the former Wigan striker will reject the advances of West Brom, in favour of a move to the Liberty Stadium with Swansea. Having held talks with both clubs, Di Santo looks set to reveal his future in the coming days after this tweet: “Soon I will have some news about my future in the next season !!! Positive 100%.”

The Swans’ addition of the 24-year old forward will make him the clubs ninth addition of the window to date, with manager Michael Laudrup also having brought in Liverpool midfielder Jonjo Shelvey and re-signed Villarreal midfielder Jonathan de Guzman on a season-long loan deal. Swansea have already brought in a striker, £12million signing from Vitesse Arnhem Wilfried Bony has joined the club, snubbing a move to West Ham in the process.

The Baggies are already looking at numerous other targets who can fill the same role Di Santo would’ve done. Lille forward Salomon Kalou is a target for both West Brom and the Hammers this summer, as the clubs fight over the £2.5million rated Ivorian, formerly of Chelsea. They have also brought in another former Chelsea star Nicolas Anelka to the club.

Steve Clark has also enquired about the possibility of bringing back Romelu Lukaku on loan from Chelsea, but manager Jose Mourinho is adamant the Belgian will play a more prominent role. The club are also in contact with free agent winger Florent Malouda, following his release from Chelsea.