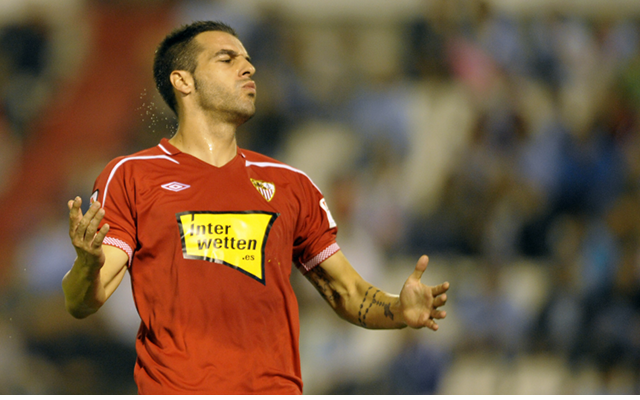 Manchester City have stepped up their pursuit of Sevilla striker Alvaro Negredo, after the Spanish sides boss, Unai Emery, claims it is “best for everyone” if the striker leaves the club according to Marca.

After an embarrassing 2-0 loss to South African side Supersport United, Sky Blues boss Manuel Pellegrini reiterated his desire to land another striker this summer after the sale of Carlos Tevez to, Serie A side, Inter Milan.

“We are working on new players that can arrive at Manchester City. We are not in a hurry to bring them now but we are clear that we need two or three more players. It’s important to have a very good squad,” Pellegrini told The Telegraph.

“I said before we came to South Africa that we needed to play for each position and that’s what we are looking for and I’m sure that we will have it. It’s difficult to say a date but before July finishes I think we will have more players.”

It has today come out that the Manchester side have in fact offered €23million for the 27 year-old, although this looks likely to be rejected as Del Nido values him at €28million.

Pellegrini will also look to sign Fiorentina striker Stevan Jovetic this week after Serie A champions Juventus appear to have dropped their interest in the Montenegro international.

Despite these two near arrivals, another face is to leave the Etihad this summer – Brazilian right back Maicon. The 32 year-old is City’s third choice right back, and has been told by Manuel that he does not feature in his plans for next season. The former Inter Milan defender is set to sign for Italian side Roma, after the two clubs agreed a £4million fee for him.

“Maicon didn’t come here to the pre-season and he will not stay in the squad at Manchester City this year,” Pellegrini told journalists in South Africa.