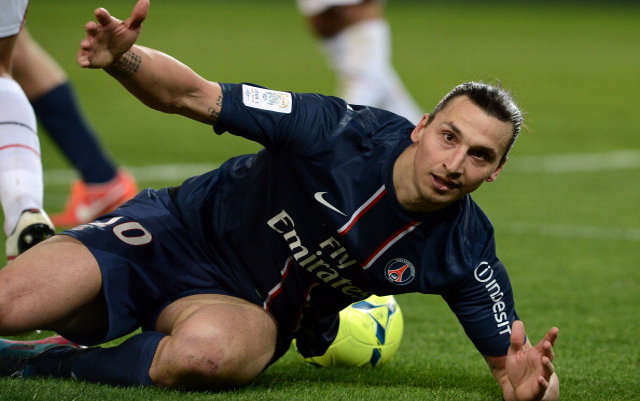 Chelsea and Man City have both been linked with a move to sign PSG striker Zlatan Ibrahimovic following speculation that the Swedish international is unhappy with his side’s pursuit, and likely capture, of Napoli ace Edinson Cavani.

The Daily Star claim that the Premier League pair could be ready to make a move for the experienced forward and that the the Stamford Bridge and Etihad Stadium side’s are the only Premier League clubs who could afford the player’s astronomical wage demands.

The 31 year old currently earns in excess of £11m a year at Ligue 1 title holders PSG but could be set to leave the Parc des Princes with the Premier League pair, and Real Madrid, all said to be interested in acquiring his services.

Ibrahimovic had an outstanding first season at PSG, scoring 35 goals in all competitions and finishing the season as the top scorer in Ligue 1 by some distance. Prior to his move to the French capital the powerful forward has enjoyed great success at AC Milan, scoring 56 goals in his two seasons at the club.

Chelsea boss Jose Mourinho enjoyed a good relationship with Ibrahimovic during their shared time at Inter Milan and the Blues manager could certainly do with a striking addition or two.

Mourinho may well consider the possibility of offloading both Fernando Torres and Demba Ba after both struggled to make an impact in the Premier League last term.

Zlatan Ibrahimovic has been a stellar success across Europe since his move from his hometown side Malmo to Ajax back in 2001. The 6ft 5in marksman has gone on to win ten domestic titles over the course of the past 12 seasons (albeit his two Juventus titles later being revoked following the Calciopoli scandal) and has amassed a total of 310 goals for club and country in a glittering career.

Ibrahimovic has publicly stated his interest in playing in the English top tier and the PSG man may feel that now is the right time to consider achieving that goal.