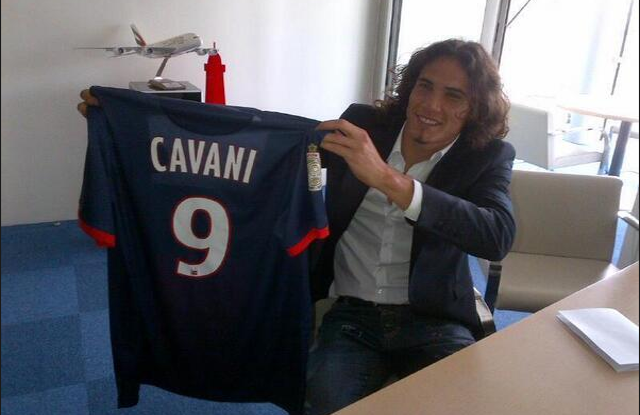 Ligue 1 big spenders fork out big sum to win race to bring in much sought after Uruguayan.

The 26-year-old Napoli forward, who was Serie A top scorer last season with 29 goals, landed in Paris on Monday morning before heading to a top city hotel to undergo a medical.

Cavani is said to have signed a five-year deal, according to PSG sources.

Late morning, outgoing PSG sporting director Leonardo was seen leaving the luxury hotel with an advisor of the Uruguay player, who is nicknamed “The Matador”.

Should the South American sign a contract with the French champions, he will line up alongside his former Napoli team-mate Ezequiel Lavezzi, of Argentina.

The current French Ligue 1 transfer record was set earlier this year, when Colombia forward Radamel Falcao signed for Monaco from Atletico Madrid for a figure estimated at nearly 60 million euros.

And although Monaco have hogged the transfer headlines in France this summer, with billionaire Russian owner Dmitry Rybolovlev spending around 140 million euros in a bid to challenge the reigning champions, PSG have now signalled their intention not to be left behind in the big spending stakes.

The capital-based club meanwhile sought to silence rumours that have been swirling in the Catalan sporting press since last week about a possible departure of the Brazil central-back Thiago Silva to Barcelona.

Silva’s agent, Paulo Tonieto, was quoted as saying on PSG’s official website: “Thiago is a PSG player. He has a contract and he will respect it.

“The rumours are the same as the ones last year but Thiago Silva is a PSG player and he’ll see out his contract with his club.”