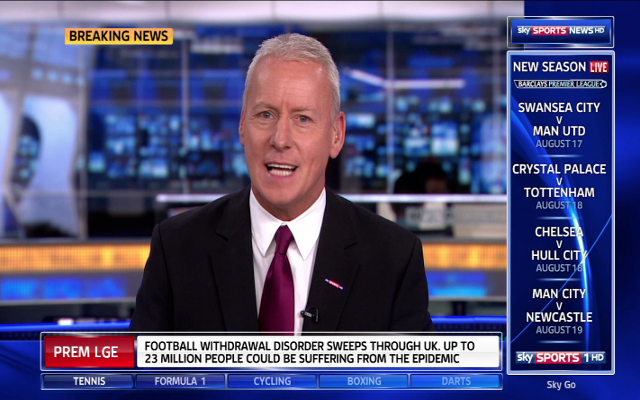 Research shows up to 23 million people could be affected.

Research from a new medical study has found that since the football season ended, up to 23 million people in the UK could be experiencing a condition known as Football Withdrawal Disorder.

According to the study, a lack of football can severely affect a fan’s mental, physical and social health. After being starved of football for months, the outbreak of FWD amongst fans is now classified as an epidemic.

With 31 days to go until the start of the new season, fans across the country are reportedly experiencing the effects of this football deficiency. Attempts at delaying the onset of FWD, including taking sudden interests in gardening, DIY and reality television, have proved futile.

Symptoms of FWD can range from irritability, mood swings, restlessness, intense boredom and, in extreme cases, loss of libido.

Watching football releases dopamine into the brain, triggering sensations of euphoria and exhilaration. When this activity no longer occurs, the fan experiences deprivation and suffers from withdrawal.

In-depth research shows that although pre-season friendlies can delay the onset of Football Withdrawal Disorder, they do not administer the required dose of dopamine and are not sufficient stimulus to fully satisfy fans’ cravings.

There may only be a few weeks until the new season kicks off, but if you think you may be suffering from Football Withdrawal Disorder, tweet us your symptoms using #fwd.