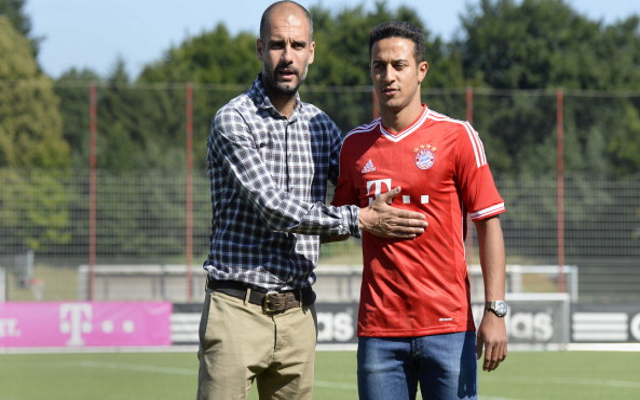 New Bayern Munich midfielder Thiago Alcantara has admitted that the chance to link up with former boss Pep Guardiola again was a key factor in his decision to snub a switch to Manchester United, Sky Sports reports.

The Bundelsiga and European champions finally completed the signing of the highly-rated midfielder from Barcelona on a four-year contract for an initial fee of €20 million (£17.3m), with add-ons taking the total amount to €25 million (£21.6m).

He had looked to be on the verge of signing for Manchester United, who had also agreed a fee for the 22-year-old, but decided to move to Bavaria instead, something that he admitted was down to his former coach at Barcelona.

“On the one hand, there’s the history of the club, which has been one of the best in the world for many years. On top of that, this team plays very attractive football. And I believe the arrival of Pep Guardiola will provide an additional boost,” he told the club’s official website.

“We’ve known each other for a long time and he’s a coach who has placed great faith in me. I’m a huge fan of the way he likes football to be played.

“There aren’t many coaches in the world with his ability. He was definitely one of the important reasons for me making the move to Munich.”

Guardiola had targeted his former charge as his number one transfer target this summer, something which chairman Karl-Heinz Rummenigge was delighted to back his coach up on.

“Only recently, Thiago was named best player at the Under-21 European Championship. He’s a fantastic player with huge potential, and he will make FC Bayern stronger.”