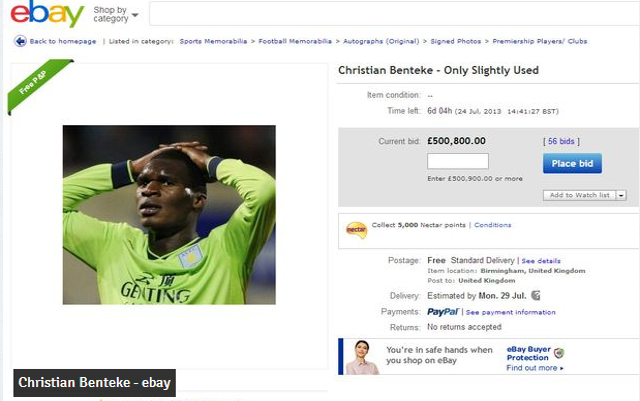 www.myoldmansaid.com have amusingly put want-away Aston Villa striker up for sale on Ebay and the bidding for the Belgian forward currently stands at just over £500k.

Clearly there is no way such a bid will become a reality and a number of ‘jokers’ have taken to the auction site to make similar ‘jokes’. One wonders if Ebay will clamp down on such acts of hilarity. They could of course whomever has made a bid of £500k to actually stump up the money, but then clearly if they did so they would also have to persuade Benteke to complete his half of such an arrangement.

The description of the ‘goods’ reads as follows.

“While Christian Benteke is in perfect working order, there are slight blemishes, but they only add to his charm as the perfect example of a modern day Premier League footballer.”

It also comes with a caution: “Be careful when trying to remove the ‘One Season Wonder’ sticker from Benteke’s forehead.”