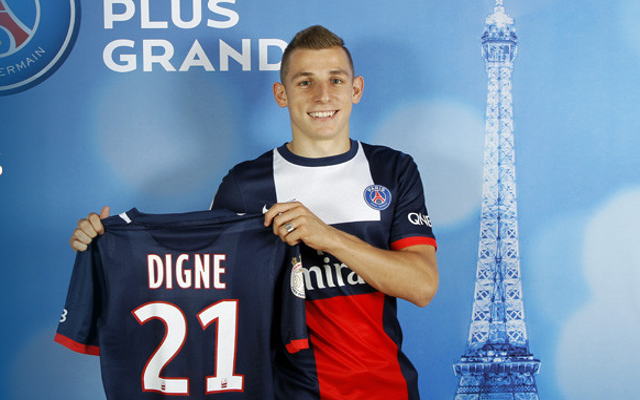 Paris Saint Germain have announced the signing of former Lille starlet Lucas Digne, after a €15million fee was agreed between the French clubs according to Sky Sports.

Digne penned a five-year deal with les Parisiens today, despite clear interest from Ligue 1 newcomers Monaco – who are not fazed by extortionate asking prices and ludicrous personal terms. Even Premier League side Liverpool were keen on the Frenchman at one point.

Laurent Blanc has made the French under 20 international his second signing in two days, after the recent arrival of Uruguayan striker Edinson Cavani from Napoli, for €64million.

“Playing at Paris Saint Germain with exceptional players is a childhood dream and a great joy. After becoming a world champion, I had a fantastic summer. I think the club officials for their confidence they have placed in me,” Digne told the club’s official website.

PSG club chairman, Nasser Al-Khelaifi, then added this about the rising starlet : “Lucas Digne, a rising star of French football and a recent winner of the Under-20 World Cup, was the subject of transfer interest from a number of major clubs and has chosen Paris Saint Germain to continue his progression on the European stage.”

“We are delighted to welcome this young French player into our squad.”

The left back will wear number 21 for the French champions, and will rival former Barcelona left back Maxwell for a place in Blanc’s starting eleven.