Liverpool manager Brendan Rodgers has told Real Madrid that they will have to give them Gonzalo Higuain and centre back Raul Albiol if they want to have any hope of landing star striker Luis Suarez.

The 26-year-old has been a long time target of the Spanish giants but they have been reluctant to meet the Merseysiders asking price of £40 million as they still hope to land Tottenham ace Gareth Bale before signing anyone else.

Premier League rivals Arsenal had become the latest side to declare an interest in the Uruguayan international after he backtracked on comments declaring his interest in leaving the country entirely.

Liverpool boss Brendan Rodgers is still hoping to keep hold of him, but CaughtOffside understands that he would be willing to let him go to Madrid but only if he can have Gonzalo Higuain and Raul Albiol as part of the deal. 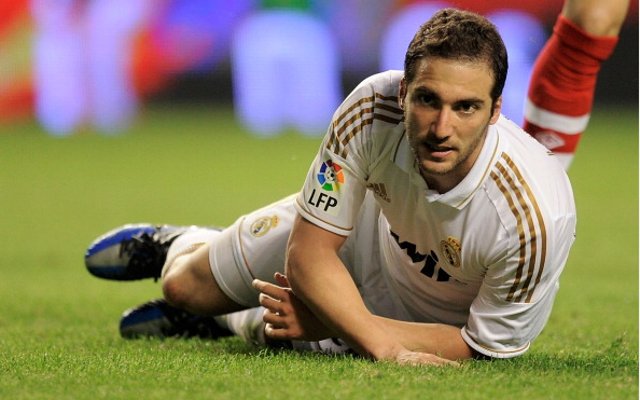 Rodgers won’t want to let Suarez go unless he has a ready made replacement lined up, and with Higauin virtually out the door already he seems to be the natural heir to Suarez’s vacant spot. However, the most interesting aspect of the deal is the inclusion of Albiol.

With the Reds still keen to add to their defensive line following Jamie Carragher’s retirement at the end of last season. Rodgers has already added Kolo Toure to his defence but is thought to want someone who can be a long term replacement for the talkative stopper who has since left to work as a pundit for Sky Sports.

The 27-year-old Spanish international already looks as though he could be exiting the club too as he has not been given a squad number by new coach Carlo Ancelotti and he has reportedly been told that he is free to talk to new Napoli coach Rafa Benitez who also wants to take him away from the Santiago Bernabeau after working with him during the pair’s time together in southern Spain.

The former Valencia stopper joined Real back in 2009 and has gone on to make 117 appearances in the Spanish capital, adding to his 40 caps for the national side in the process.

However, the emergence of Raphael Varane has pushed him behind in the pecking order and he is expected to move on this summer in order to keep his chances of a spot in Spain’s World Cup squad next year.