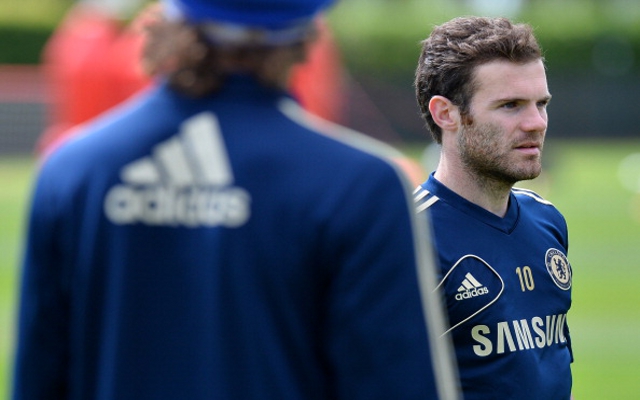 Emirates Stadium side nearly bought the Spaniard two years ago, only for the Blues to snap winger up instead.

Arsenal are pondering making a sensational move to sign Chelsea midfield player Juan Mata this summer, according to exclusive reports in the Daily Mail.

The north London club, armed with a reported summer transfer war chest valued at £70 million, have been linked with a whole host of big-name players from across the Continent of late, including the likes of Real Madrid striker Gonzalo Higuain, Liverpool front man Luis Suarez and Manchester United attacker Wayne Rooney.

However, as yet the club have still to bring any of those star names to the Emirates, although it now appears as though Arsenal head coach Arsene Wenger is set to turn his attentions towards Chelsea’s brilliant Spain international instead.

The Frenchman actually tried to sign the 25-year-old from Valencia in the summer of 2011, only for arch-rivals Chelsea to beat him to his signature, with Mata eventually agreeing a five-year contract with the west Londoners in a deal worth £23.5m in August of that year.

And it is fair to say that in the intervening two-year period, the wide man has proved himself to be the Blues’ most consistent and eye-catching performer, registering a staggering 32 goals and 59 assists for the team in only 118 matches.

But despite Chelsea manager Jose Mourinho’s protestations earlier this week that there was “no chance” of Mata being sold this summer, Wenger has still been asked to be kept informed by Chelsea regarding their plans for the winger with a view to purchasing him this summer.