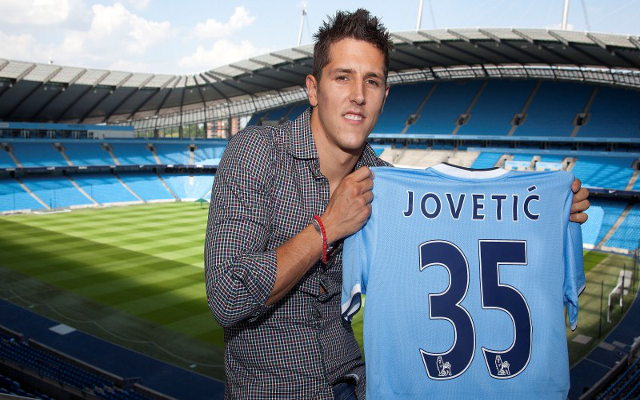 Etihad Stadium side sign second striker of the day.

The 23 year old is said to have cost the Etihad Stadium side £22m and is the second striker to sign for the club today after Manuel Pellegrini completed a move to capture Sevilla forward Alvaro Negredo this morning.

Jovetic had been strongly linked with interest from Arsenal but a move to the North London side failed to materialise.

Indeed it had looked as though a Fiorentina departure was off the table until the Serie A side signed Mario Gomez from Bayern Munich, which appeared to suggest that Vincenzo Montella would be losing the services of his star striker.

Montenegro international Jovetic finished the last two seasons as the club’s top scorer, scoring 27 goals in 58 appearances in the process.

The cultured forward will unite with former team-mate Matija Nastasic at the Premier League side and is Man City’s fourth high profile signing of the summer with the Fernandinho, Jesus Navas and the aforementioned Negredo joining the club from Shakhtar Donestk and Sevilla respectively.

Man City clearly felt the need to replace Mario Balotelli, who left in January, and Carlos Tevez who both moved to Italy.

One wonders where these two striker purchases leave Edin Dzeko, who may well be returning to a back-up option role given that Pellegrini also has club record signing Sergio Aguero in his armoury.