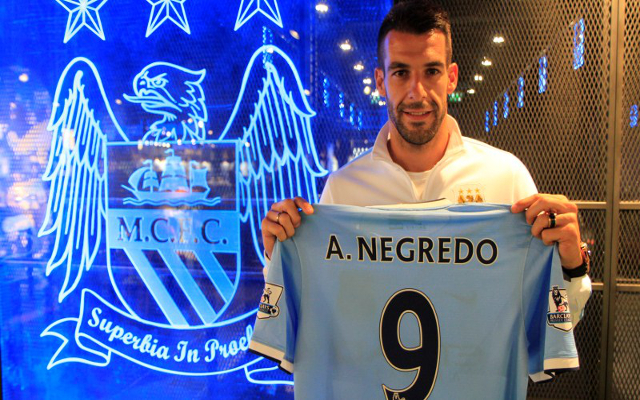 Manchester City have confirmed the signing of Spanish striker Alvaro Negredo from Sevilla to become the club’s third summer signing.

The club’s official website confirmed the deal on Friday and the 27-year-old will now link up with his new teammates in South Africa on their pre season tour and will be handed the number nine shirt ahead of the season.

He has been one of the Primera Division’s most potent strikers and last season bagged 25 league goals, making him the highest scoring Spaniard in the country and only behind Radamel Falcao and Lionel Messi overall.

After graduating from Reyo Vallecano’s youth system and made a sparse impact on the first team before moving across the city to join Real Madrid in 2005.

However, having failed to make an appearance there he was shipped out to Almeria where he began to establish himself as a deadly forward, notching 32 goals in his two seasons there.

Sevilla then broke their transfer record to take Negredo to the Ramón Sánchez Pizjuán in 2009 and were handsomely rewarded to the tune of 70 goals in 139 appearances over four seasons.

He has yet to truly establish himself within the national set up, but his transition from Spain to England will be made easier by the likes of Javi Garcia, David Silva and Jesus Navas, whom he has followed to the club from Sevilla, all being on hand to help him settle in.