Anfield side close in on move to bring in Danish international.

Liverpool have reportedly agreed personal terms with Danish international Christian Eriksen ahead of a possible move to sign the Ajax playmaker.

CaughtOffside understands that the Anfield side have made their interest in the 21 year old known to his Amsterdam employers who have given the Premier League side permission to discuss terms with Eriksen though agreement on a fee for the player is yet to reached.

Ajax boss Frank de Boer publicly stated that Liverpool had expressed interest in Eriksen some weeks ago and following an unsuccessful move to bring in Shakhtar Donestk attacker Henrikh Mkhitaryan, who opted to join Borussia Dortmund earlier this month, Brendan Rodgers has stepped up his pursuit of the talented young midfielder.

Eriksen is said to be keen on a new challenge having won three straight Eredisie titles with Ajax and has been impressed with Liverpool’s push for a long term squad building programme that has seen the Anfield side accumulate a large number of young talents. 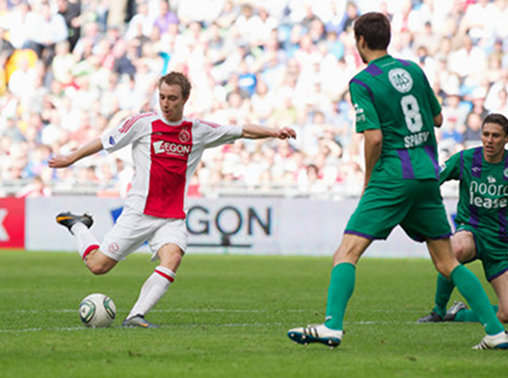 Liverpool are looking to push on with efforts to secure a coveted Champions League berth and the club’s owners have made funds available for Rodgers to make a big name signing this summer.

Rodgers has wisely looked to balance his early summer signings by covering the outlay with sales of Jonjo Shelvey and Andy Carroll to Swansea City and West Ham respectively, consequently the captures of Kolo Toure, Luis Alberto, Iago Aspas and Simon Mignolet have not eaten into his transfer funds.

Liverpool had initially looked to offer £15m for Ajax star Eriksen but the Dutch side are said to be looking to garner a fee nearer £20m from the sale of the former Odense youth team player but it is felt that the two sides are ready to reach a compromise on a deal worth around £18m but one that will almost certainly also include a sell on clause that would see the selling club receive a significant portion of any potential future sales of the talented starlet.

Rodgers is keen to add creative talents to freshen up his midfield and sees Eriksen as a possible long term successor to Steven Gerrard and a player he can build his young side around.

It is thought that the presence of close friend, and national team colleague, Daniel Agger at the Merseyside club could well be a motivating factor that will see Eriksen elect a move to Liverpool ahead of other potential suitors.

Christian Eriksen has made 157 appearances in all competitions for Ajax, scoring 30 goals and providing 40 assists in Eredivisie action alone.

AC Milan are also said to be interested in Eriksen though are yet to discuss their interest with either Ajax or the young Dane.