City’s new Spanish forward knows exactly where the goal is and is sure to add some excitement to the Premier League next season.

Following Manchester City’s capture of highly rated Sevilla front man Alvaro Negredo on Friday, we at Caughtoffside are here to profile the new man in the north west and let the Blues fans know just what they can expect to see from the Spaniard at Eastlands next season and beyond ….

Watch Negredo in action below:

And so the new arrivals just keeping on coming at mega-rich City, with Alvaro Negredo now joining the likes of Shakhtar Donetsk’s Fernandinho and Sevilla’s Jesus Navas in the City first-team squad next season, with the 27-year-old having agreed a four-year deal worth £75,000 per week at an initial cost of just £16.4 million to the club, although that could potentially rise to as much as £20.6m depending on add ons.

However, the transfer fee has already raised more than a few eyebrows among those experts who have followed the player’s Liga career closely over the years.

One man who also knows Negredo’s game well, though, is new City manager Manuel Pellegrini, who has been coaching in Spain since 2004, and it is understood that the experienced Chilean asked City director of football Txiki Begiristain to make the signing of the muscular striker as an absolute priority this summer, especially following the recent departure of forward Carlos Tevez to Juventus.

Madrid-born Negredo, nicknamed ‘La fiera de Vallecas‘  – ‘The beast of Vallecas’ – back in his homeland, turned out for a number of clubs in Spain after making his debut for local team Rayo Vallecano in the 2004-05 campaign, although it was not really until he moved to lowly Almeria in July 2007 that his career really began to take off. 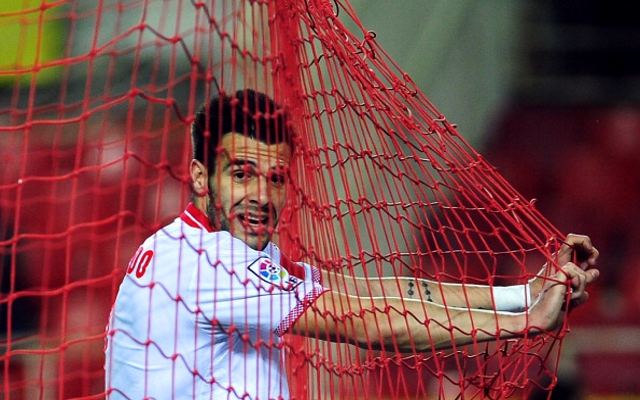 Two successful years with the newly promoted Liga outfit saw Negredo net 32 goals in just 73 appearances and brought this hulking beast of a centre forward to the attentions of some of Spain’s bigger clubs, with Sevilla eventually winning the race to sign him for 15 million euros in July 2009.

Negredo’s game really moved up another level in the four campaigns he spent in Andalucia, with the attacker gaining huge confidence from the move to Southern Spain, so much so that he was even rewarded with his first call-up to the La Roja national team squad in October 2009 for a Fifa World Cup qualifier against Armenia.

And in the past four years the Spain international has netted six goals for his country in 14 appearances, while also being chosen for last summer’s European Championship finals in Ukraine and Poland where head coach Vincente del Bosque even selected Negredo to start the holders’ victorious semi-final against Portugal.

But after an impressive overall record of 85 goals in just 180 matches for Sevilla, including 70 strikes in only 139 Liga contests for the club, the forward has now opted to try his hand out in the Premier League, where his powerful presence and all-round physical game should be ideally suited to the style of the English top flight.

Negredo may not have much pace in his game, but what he lacks in speed he more than makes up for with his shooting ability, and boy does the Spaniard love an effort on goal, with only Barcelona’s Lionel Messi (46) and Real Madrid’s Cristiano Ronaldo (34) having more attempts on goal than Negredo’s 25 shots across Europe’s top-five leagues last season.

In fact, the only real question marks surrounding Negredo’s game concern the number of clear-cut chances he can often miss before actually finding the back of the net, which for a £25m-rated striker could most definitely be worked on, and his temperament, with the fiery Spaniard having seen red on more than a few occasions during his nine years in La Liga.

However, if ‘The beast of Vallecas’ continues to bang in the goals at a similar rate to what he managed while with Sevilla, then few at City will be worrying about those two minor imperfections in the future.