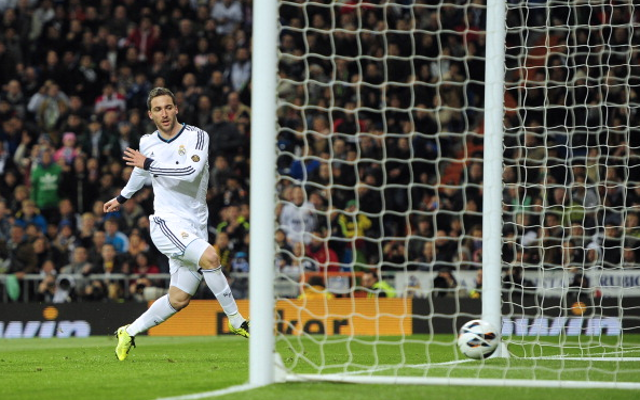 Emirates Stadium side to re-ignite interest in Bernabeu forward.

Arsenal could return with an improved offer for Real Madrid striker Gonzalo Higuain after Napoli decided not to bid for the forward according to the Daily Mail.

The Argentine international forward has been on the radar of Arsenal boss Arsene Wenger for the majority of the summer and the Emirates Stadium club thought they had previously agreed a deal worth around £22million for the 25-year-old.

However the former River Plate man has remained at the Bernabeu after new Real Madrid manager Carlo Ancelotti decided to put the buffers on a possible transfer. Madrid president Florentino Perez has now claimed that the club do not want Higuain to leave this summer despite previous reports and has consequently increased their valuation to nearly £40million.

However after Napoli’s interest in the player reportedly ended, with the Italian club unwilling to pay the £35m quoted by the La Liga runners-up, the Gunners could re-enter the race.

Napoli boss Rafael Benitez had looked at the striker as a replacement for Edinson Cavani, who has joined Paris Saint-Germain in a massive deal worth £55m, but the Naples side have decided that the asking price is above their valuation of the player who has netted 122 goals in 266 appearances for Real.

Carlo Ancelotti now has spoken about the future of the French-born marksman at Real and while he failed to give assurances about his future, he did indicate that the Argentinian will get his chance to impress him. He is reported by the Guardian as saying: “I have spoken to the player but it was a private conversation,
“He is currently a Real Madrid player and I am happy to have him here.”

Higuain is currently in England as part of Real Madrid’s pre-season tour and is likely to be a member of the Los Blancos team that takes on Championship side AFC Bournemouth later tonight.