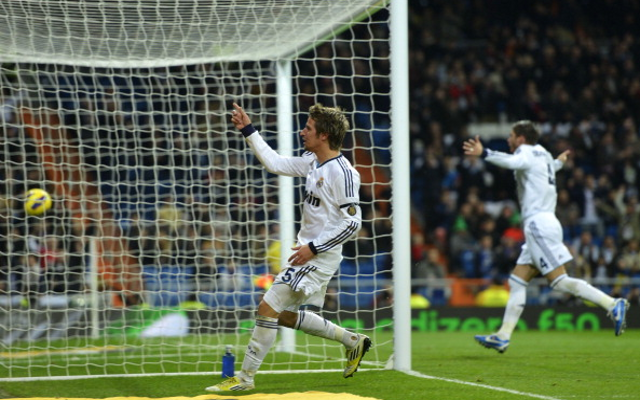 Stamford Bridge side could make move for Bernabeu full-back.

Chelsea are reportedly keeping a close eye on developments at the Bernabeu as Real Madrid prepare to offload Portuguese full-back Fabio Coentrao according to the Sunday Express.

The 25 year old has had an up and down time of it since moving to Real Madrid in a £30m deal in the summer of 2011 and has run the gauntlet of supporters who question his conduct and attitude and having missed the first few days of pre-season training there is growing speculation that the former Benfica man is on his way towards the exit.

This source claims that Coentrao is “more likely to leave than to stay at the club” and has strongly linked the left-back with a move to reunite with Jose Mourinho at Stamford Bridge.

Given that Ashley Cole is edging towards the latter stages of his career there would perhaps be a decent chance that the West London side could be keen on a long term replacement and on his day Coentrao is one of the best in the business.

Long term Cole back-up Ryan Bertrand is maybe not a top class option to turn to if Mourinho does indeed have to turn to an alternative left-back option.

Coentrao is also adept at playing further up on the left and if he is to leave Real Madrid could perhaps be tempted by a move to join Chelsea.