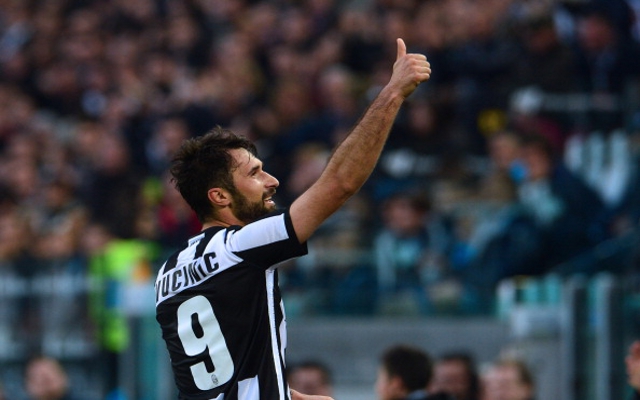 Juventus striker Mirko Vucinic has raised the prospect of a Premier League move this summer, admitting that he is considering leaving the Turin club after the arrivals of Carlos Tevez and Fernando Llorente according to the Express.

Sources from Italy indicate that the 29-year-old is contemplating a move away from the Old Lady after Juve coach Antonio Conte revealed that Vucinic may not be first-choice next season.

Conte has reportedly said it is “difficult to see a Juve with Vucinic, Tevez and Llorente on the field at the same time” and the striker has read into these comments that he unwanted at the Serie A club. Manchester United are thought to be monitoring his progress at the Juventus Stadium and with England international Wayne Rooney’s future ambiguous, new United manager David Moyes could move for the former Roma man as he searches a suitable striking partner for Dutch ace Robin van Persie.

The Old Trafford club would face possible competition from the San Siro with AC Milan also thought to be interested in bringing the attacker to Milan while Russian side Zenit St Petersburg appear another option for the Montenegrin forward. Zenit’s manager Luciano Spalletti has already worked with the player during his time at Roma where Vucinic netted 64 times in his 202 times for the club and that could make the Russian side hot contenders for his signature.

Juventus will be unwilling to let the striker, who has spent time at the Old Lady playing as a winger, leave at a reduced price and could demand a fee upwards of £13million to see him depart this summer.