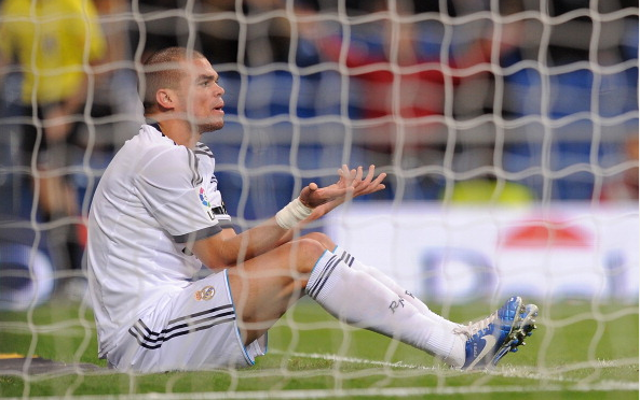 Etihad Stadium side look to strengthen their defence with move for Portuguese international.

Man City boss Manuel Pellegrini is looking to continue his side’s summer spending spree by making a move for Real Madrid centre-back Pepe according to the Daily Star.

The Etihad Stadium side have certainly gotten a taste for spending again having forked out over £90m to bring in Fernandinho, Jesus Navas, Alvaro Negredo and Stevan Jovetic and now Pellegrini is looking to strengthen his defence with a move for Portuguese international Pepe.

Real Madrid are thought to be looking to secure £30m from any potential sale of the 30 year old, a fee that Man City feel is too inflated a price for a player who is now no longer a first choice starter at the Bernabeu.

The former FC Porto man saw his place in Jose Mourinho’s side taken by young talent Raphael Varane, who formed a solid pairing with Sergio Ramos last term, and there is every chance that new boss Carlo Ancelotti will persist with the same pairing.

Even if City do manage to lure Pepe to the Premier League they will still look to offer England man Joleon Lescott a one year contract extension, this despite the fact that he too has been forced out by a up and coming defensive talent in the form of Serbian Matija Nastasic.

Volatile Real Madrid man Pepe moved to the Spanish giants in the summer of 2007 and has amassed 199 appearances for the club.