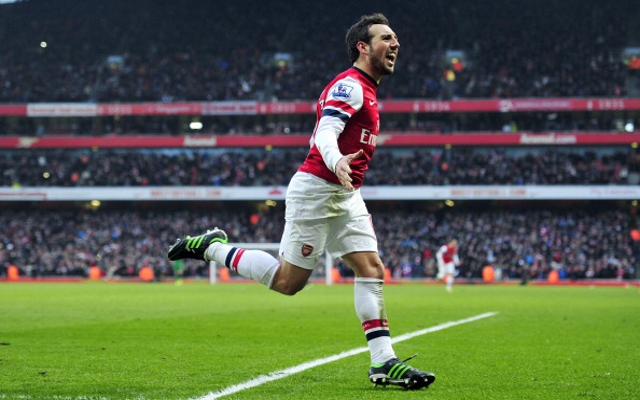 Atletico Madrid are seemingly still hopeful of luring Arsenal playmaker Santi Cazorla to the Vicente Calderon with the Daily Express claiming that the La Liga side could be plotting a ‘sensational’ move for the pint sized attacker.

Arsene Wenger is very unlikely to consider any offers for Cazorla after a stellar first season at the Emirates Stadium, during which starting 37 of Arsenal’s 38 Premier League fixtures last term, scoring a dozen goals and finishing the campaign as the club’s leading assist maker with 11.

Atletico Madrid no doubt have a fair sum of money in the bank having sold Radamel Falcao to Monaco and having brought in David Villa for less than £2m could well be looking to improve their attack with a big name signing.

Diego Simemone reacted to speculation about a move for Cazorla by stating;

“It is not good to talk about individual players, but until the club closes the comings and goings, anything is possible.”

“We’ll see what happens from the sporting directors. Until the window is closed, anything is possible.”

Though some may push the theory that Cazorla could one day consider a move back to his native Spain it would be very strange of the former Malaga man were to push for an exit after just one year in England.