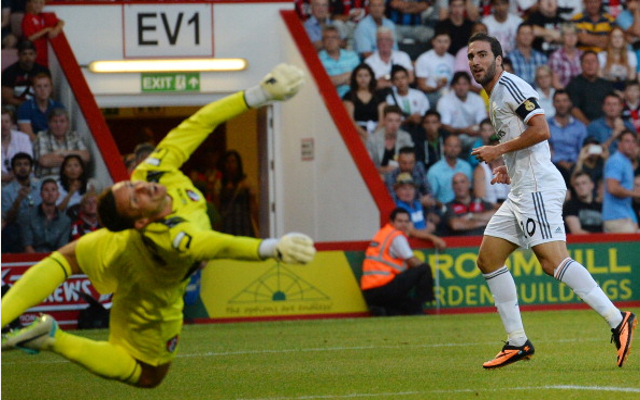 After weeks of speculation about Higuain’s future, newly appointed Real Madrid boss Carlo Ancelloti has rubbished talks about the Argentine leaving – after the sides 6-0 win over Bournemouth according to the Daily Mail.

Madrid boss, Ancelloti managed his first game for the Spanish giants yesterday and he brought on Higuain at the back. On the 47th minute the 25 year-old grabbed his sides fourth goal of the game, as they continued their demolition at Dean Court.

Despite strong interest from Arsenal and Napoli, it appears Gonzalo may make a u-turn to stay in Spain, after Carlo made him feel wanted and like one of his first team squad.

After the Bournemouth game, Carlo told reporters : “Not true, I don’t have any news about this,” when asked about rumours of Napoli agreeing a €35million fee for the striker.

“I think that now we have to speak about Higuain as a Real Madrid player. He is a fantastic player and a fantastic striker who took one minute to score tonight [he actually took two].”

“He is very important to us, and nothing else – it is not my business to judge the price of a player.”

Carlo also rubbished any rumours of Cristiano Ronaldo leaving his side this summer, telling reporters : “His future is at Real Madrid, there is no question about this.”